Papua New Guinea’s economy performed strongly on the trade front in 2016, according to the Bank of Papua New Guinea’s biannual Monetary Policy Statement. However, this did not translate into inflows of foreign exchange, and government revenues are expected to remain under pressure. 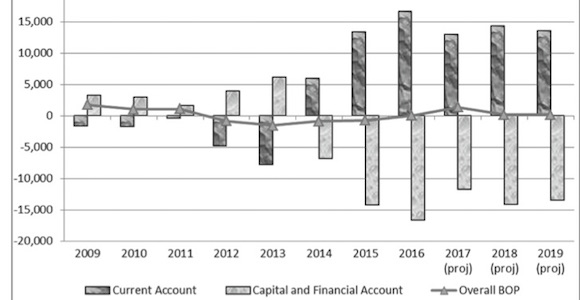 ‘This is expected to further improve in 2017 to a surplus of K1.36 billion, with a surplus in the current account more than offsetting a deficit in the capital and financial account,’ he said.

The PNG economy is thriving on the trade side. The statement projects that this year there will be a surplus on the current account (which measures trade and net income flows) of K13 billion.

‘The large financial outflows, which are contributing to the foreign exchange shortages, will continue.’

‘This is mainly due to an increase in global commodity prices, ongoing LNG exports and higher production of some other export commodities.’

The picture is not so rosy on the financial side, however. The statement anticipates that the large financial outflows, which are contributing to the foreign exchange shortages, will continue.

The statement projects a deficit in 2017 in the capital and financial account of K11.67 billion. ‘This mainly reflects outflows from ongoing debt servicing by the PNG LNG project,’ the statement says.

‘At the end of 2016, foreign exchange reserves were K5.26 billion, which is sufficient to cover 7.2 months of total imports.’

‘The high current account surplus in 2016 was driven by LNG exports. This did not translate into foreign exchange inflows into the domestic economy because of provisions for accelerated depreciation write-off on allowable capital expenditure under the LNG Project Development Agreement.

‘Developers of mining, gas and petroleum projects are allowed to have offshore foreign currency accounts from which their offshore liabilities are paid.’ The statement predicts that deficits in the capital and financial account will continue in 2018 and 2019.

The statement says that, at the end of 2016, foreign exchange reserves were K5.26 billion, which is sufficient to cover 7.2 months of total imports and 12.6 months of non-mineral imports.

‘Given the challenges in raising external financing there could be a shift towards raising funds from domestic sources.’

It projects that the level of foreign exchange will rise to K6.62 billion by the end of this year.

‘The increase in the level of reserves mainly reflects increased inflows from non-mineral export receipts and receipts for royalty and development levy associated with the PNG LNG project,’ the statement says. 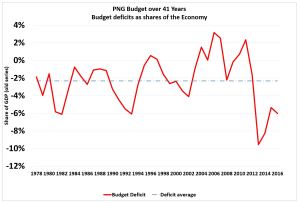 But the Governor’s statement anticipates that this year the fiscal deficit will fall to K1.88 billion, which equates with 2.5 per cent of nominal GDP.

It points to lower tax collections, rather than increased expenditure, as the main cause for the deficits.

Funding the fiscal deficit is expected to be a challenge. The statement acknowledges that ‘given the challenges in raising external financing,’ there could be a shift towards raising funds from domestic sources.

But it warns that ‘this is also becoming difficult, given that major financiers may have already reached their limits on exposures to the government.’

Last year, the economy grew, after inflation, by 2 per cent—down from 11.5 per cent in 2015. The bank says this year the economy is expected to grow, in real terms, by 2.8 per cent. (Recent projections by the Asian Development Banker predicted 3 per cent growth.) 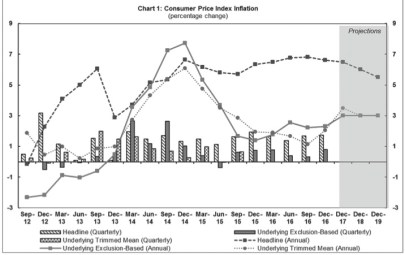 The Bank says its monetary policy stance will remain neutral for the first half of 2017.

‘PNG, as a small open economy will continue to be exposed to external and domestic shocks,’ the statement says. ‘Developing the non-mineral sector is critical to build a resilient economy that can help minimise the impacts of these shocks.’

The statement adds that ‘over the years’ negotiated project agreements have ‘resulted in instances where they have been used by the project developers to obtain preferential treatment and concessions from the State in a very uncoordinated manner and without detailed analysis of the costs and benefits of such agreements.’