Contracts to provide seven core services for APEC are expected to be carried out by PNG businesses, according to the CEO of the PNG APEC Co-Ordination Authority, Christopher Hawkins.

He has told a Port Moresby Chamber of Commerce briefing that the PNG government has no intention of doing ‘the work of business.’

‘We are currently appointing staff and releasing tender documents,’ he said.

Hawkins said that local companies will be contracted to provide gift bags, memorabilia, and official APEC shirts. This is in line with the organisation of the last four APEC summits, he said. He also noted that up to 20,000 bilum bags may be required.

‘The APEC shirts will be produced locally-printed, sewn here,’ he said.

‘We want delegates to go back to their countries … with a new understanding of PNG.’

According to Hawkins, security is a key issue—particularly ‘in today’s world, where there are so many threats, people who want to interrupt modern society’.

‘But, at the same time, when we do deliver a series of APEC meetings, we want delegates to go back to their countries—back to the 28 APEC economies around the world, as well as other countries—with a new understanding of PNG in terms of the investment opportunities that the country has to offer.

‘And also (we want them to understand) the great spectacular and cultural geographical locations around the country as part of the drive to increase tourism in the country.’ 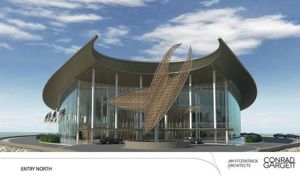 Hawkins said APEC Haus, where the Leaders’ Summit will be held, is on track to open in July, 2018.

Construction of APEC Haus is being undertaken by Oil Search through a tax credit scheme, which he believes is a ‘very effective way of ensuring the private sector is involved in delivering a private sector project’.

Hawkins said it means the project is not reliant on government cash flow and commodity prices.

He added that the summit would not be just one event held over two days, but ‘a year-long event, involving about 200 meetings’.

Hawkins said the first ministerial meeting had been brought forward to 9 October this year. The rest of the meetings will begin from January 2018, including some smaller meetings in regional centres, involving up to 200 people.

‘The main event will be in November when up to 10,000 delegates will be here.’

The main meeting dates of 17/18 November, 2018, which are on a weekend, will probably be declared as public holidays.