As Papua New Guinea business gets back to work, Business Advantage PNG looks at some of the issues coming up in 2017. It looks likely to be a year of preparation for better times.

2017 is an election year in Papua New Guinea, with voting scheduled to take place from late June to early July.

‘Overall, economic growth is likely to be modest.’

Traditionally, government activity slows down as the country approaches the commencement of campaigning in the second half of April. Papua New Guinea business will be hopeful that any social disruption will be kept to a minimum.

Overall, economic growth is likely to be modest: the Asian Development Bank is forecasting 3 per cent growth for 2017 in PNG.

The weak global economic and low commodity prices last year have taken a toll on government revenues, and consequently, the national budget for 2017 is smaller this year than last, expected to be K11,088.8 million.

‘Will 2017 be the year PNG’s foreign exchange shortages disappear?’

The Treasurer, Patrick Pruaitch, has already flagged that a Supplementary Budget will review tax measures proposed in the 2017 Budget early this year.

Will 2017 be the year PNG’s foreign exchange shortages disappear? Probably not, according to the nation’s bankers, but some are at least anticipating periods of relief this year. Improved receipts from the commodity exports—especially LNG, the price of which is at a 12-month high—are helping. 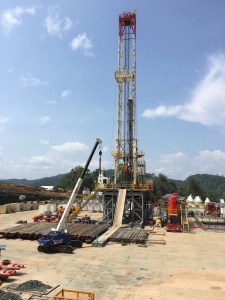 A gas rig at Antelope 6—one of the wells that will feed the Papua LNG project. Source: InterOil

The main project to watch is undoubtedly the Total-led Papua LNG project, PNG’s second LNG project. A green light for this project is likely to bring a significant amount of foreign currency into PNG.

Total E&P PNG’s Managing Director Philippe Blanchard has indicated that, if the project is to start production in 2022/23 as hoped, front end engineering and design (FEED) work will need to start this year, ahead of a final investment decision in 2018.

An early milestone to be passed is the resolution of ExxonMobil’s bid for Papua LNG venture partner, InterOil. InterOil shareholders vote on the US giant’s revised offer on 14 February.

Meanwhile, one dividend of the existing ExxonMobil-led PNG LNG project is the agreement to release gas for local power generation. ExxonMobil has flagged its intention to start construction of a new 50-megawatt power plant outside Port Moresby in early 2017—a move that should ensure a much more reliable power supply to the capital in future.

‘If all goes as expected, the power supply in Lae will be more regular and reliable.’

In PNG’s manufacturing hub, Lae, matters are also progressing, with Daewoo and Oil Search building power plants, and more work being done to improve transmission in the Ramu Grid that services the city and the Markham Valley.

‘If all goes as expected, the power supply in Lae will be more regular and reliable,’ noted Lae Chamber of Commerce President Alan McLay earlier this month. ‘This will be a further attraction for further industries to relocate here.’

With Prime Minister Peter O’Neill taking amendments to the Mining Act off the table until after the June/July National Elections, all eyes will be on the progress of mining projects currently under development.

Of these, Harmony Gold/Newcrest Mining’s Wafi-Golpu and PanAust’s Frieda River are the most advanced, with both projects lodging applications for mining licences last year.

An extension of the life of PNG’s largest producing mine, Ok Tedi, is also a possibility. The copper mine came back on line last year after being closed because of drought and safety issues.

The Managing Director, Peter Graham, says the company’s costs are now in the top quartile on global comparisons, and that the mine life may be extended to 2030.

Will BSP list overseas? Before Christmas, Bank South Pacific’s Chairman, Sir Kostas Constantinou, played down media speculation that the country’s largest bank was going to list on the Australian Stock Exchange. That said, he did confirm that the bank was considering listing on a second exchange as a way of improving ‘the liquidity of its share register’.

‘Internet costs in PNG are high, but that may improve significantly this year.’

The overseas listing of the country’s largest bank would most likely dwarf the successful listing of Kina Bank on the ASX back in July 2015.

Meanwhile, the country’s insurers are eagerly awaiting the appointment of a new Insurance Commissioner.

Internet costs in PNG are high, but that may improve significantly this year. PNG’s National Broadband Network looks set for completion, and greater redundancy looks likely, with another international undersea cable in the offing. 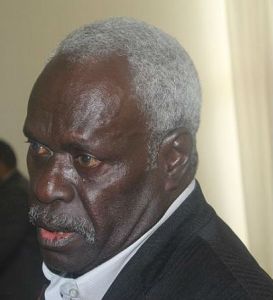 Meanwhile, the country’s major internet service providers (ISPs) have agreed to establish a Neutral Internet Exchange Point (IXP) facility in Port Moresby, according to the ICT regulator, the National Information and Communication Technology Authority (NICTA). NICTA CEO Charles Punaha has predicted that internet costs will fall sharply as a result.

Last year’s was the strongest coffee crop since 2011, according to provisional Bank of PNG export figures. Combined with improved prices over the past year, things are looking up for PNG’s coffee producers. Meanwhile, palm oil prices are at 12-month highs and production has been maintained, but cocoa producers will be hoping for a rise in prices this year.

Infrastructure, in particular the reliability of the main route to market, the 1,200 km Highlands Highway, continues to act as a brake on growth, however. Highway users will be hoping the Asian Development Bank’s proposed Sustainable Highlands Highway Investment Program to restore, maintain, and upgrade the 450 km stretch of the HIghway between Lae Nadzab airport to Kagamuga airport at Mt. Hagen can be fast-tracked.

With the APEC Leaders Meeting in November 2018 approaching, we can expect to see significant changes in Port Moresby, as the meeting is acting as a deadline for several projects.

Expect to see progress with the development of the capital’s waterfront areas in Town, as plans firm up for the relocation of the city’s port to Motukea Island and the construction of Paga Hill Estate and APEC Haus progresses.

Its fantastic to say the applications were submitted last year for Frieda River & Wafi Golpu. What is the expected time for approval/Rejection on these projects or is it best to wait for a drop in the gold price so the applicants delay instead of PNG Governement?