Oil prices are likely to remain volatile and LNG prices may head lower due to complex shifts in supply and demand. Other commodities seem more likely to be on an upwards trend, but the picture is patchy. 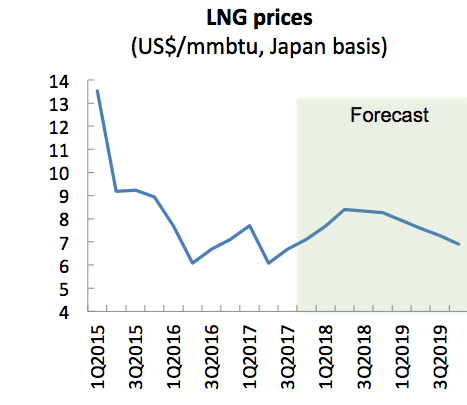 Research by the Economist Intelligence Unit (EIU) says volatility will be the ‘new norm’ for oil prices’. It says most industrial raw materials prices are on an ‘upward, albeit a wobbly’ trajectory.

The report predicts LNG prices will rise by 18.4 per cent this year.

‘LNG consumption in Japan, South Korea and Taiwan is likely to increase.’

‘This will be supported by a 18.3 price rise in crude oil prices, setting a floor under LNG prices.’

The report predicts oil prices will come down next year, however, due to a ‘supply glut’, steady increases in supply from America and a ‘slump in Chinese demand in 2018.’

LNG consumption in Japan, South Korea and Taiwan is likely to increase and remain strong, the report says.

‘There is rising non-OPEC oil production and shale production.’

The report anticipates there will be strong growth in European Union demand—9 per cent annually, on average. The shipping industry ‘could be a new source of demand’.

On the negative side, Indian and Egyptian imports are expected to slow, and the Qatar crisis could disrupt the market.

Supply will also increase when Australian, American and Malaysian projects come on stream, the report says. Overall, the picture presented is one of volatility, with a number of cross currents affecting the price.

‘The OPEC production cut agreement has been extended to March 2018, which has a slight downside impact to supply; but there is rising non-OPEC oil production and shale production. This is creating new price dynamics.’ 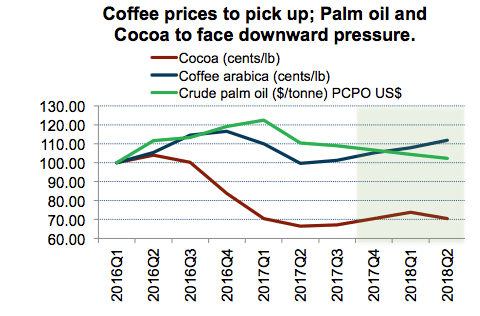 The report says cocoa production globally is likely to rise above expectations, which will put downward pressure on prices.

It is also bearish on palm oil, saying rising stock levels ‘will push prices down in 2017, and especially in 2018’.

Coffee prices, however, are expected to ‘pick up’. The report says Arabica prices will rise ‘as production falls in 2018’ and Robusta prices are likely to be supported because of strong consumption from Asia.

The report is bullish on gold.

‘Negative yields in many countries will put a floor under the gold price, and cautious monetary tightening will also buoy the upward trend in prices.‘

PNG’s real GDP growth, according to the EIU, will remain ‘in line’ with other commodity producers.

‘In the short run, growth will be supported by government spending ahead of APEC. But low commodity prices will weigh on fiscal revenues and investment prospects.

‘Growth in public revenues tracks key commodity export price trends. The economic benefits of large investment projects in the energy sector are likely to be largely seen after 2021.’