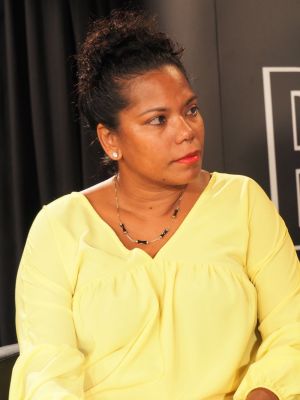 In early 2015, Ernestine Maxtone-Graham returned to PNG to join her husband, Mungo Maxtone-Graham, with the intention of developing a business, MaxtoneHaus, based on the increasing demand for coconut products.

‘I was coming back to PNG and I wanted to get involved with coconut because I used coconut-based products while we lived in Australia,’ New Ireland-born Ernestine tells Business Advantage PNG.

‘Also, copra helped put me and some of my siblings through school. My family used to produce copra, as did so many families in PNG.’

Ernestine and Mungo started their coconut oil processing plant at Kanudi in Port Moresby in June 2015, buying copra from local farmers along the coastal villages in the Abau District of the Central Province, about a five-hour drive from the capital.

‘We started buying coconuts which had been sun-dried, but now we buy whole coconuts which we hot-air dry ourselves. They come dehusked. The shell is used for fuel, the meat is pressed for oil and when we’ve finished, the meal that comes out is sold to piggeries. No wastage.’

The wife and husband team chose to base themselves in Port Moresby because it would be easier to process, market and ship from the capital. But that is about to change.

‘One of the continuous challenges is having consistent supply. We’re now at the stage of deciding to relocate closer to the source of supplies.

‘Moving to Kimbe will not just cut down travel time, being closer to the source of her raw materials means she can ensure consistent quality.’

‘So. we will be based in Kimbe [in West New Britain] by the end of the second half of the year. That will prove another challenge, because getting the products out of Kimbe is not easy, as there aren’t as many ships coming to Moresby from there.’

Moving to Kimbe will not just cut down travel time; being closer to the source of her raw materials means she can ensure consistent quality.

‘We’re getting coconut from a variety of farmers and, if we are closer to the source, we know where the coconut is coming from. We can also liaise with the Coconut Industry Corporation.’ 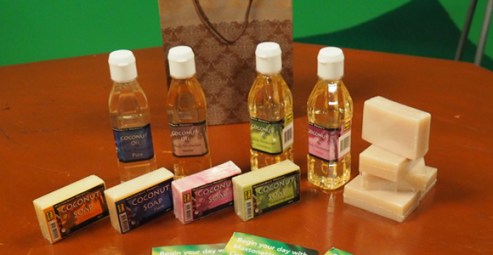 Farmers are able to see what is happening to their product and can be trained to produce higher quality coconut.

The processing will done in Kimbe and there will be a warehouse in Port Moresby.

MaxtoneHaus products are sold throughout PNG through City Pharmacy Group, A Little Something From PNG at Jackson’s International Airport and into North Queensland through the supermarket chain, Ibis Supermarket.

‘Before we actually started production we talked to him about how we could enter the market with our range.’

Their initial range includes oils and soaps, although Ernestine says she is planning on two new products by the end of 2017: coconut cooking oil and coconut ointment.

‘Coconut oil has a lot of medicinal properties. I’m not going to say it will cure diabetes, but it has been used as an ointment.’

She says coconut oil contains lauric acid and monolaurin, which can kill harmful pathogens like bacteria, viruses and fungi. When applied to the skin, coconut oil offers protection from microbial infections that can get into open wounds.

‘It may be possible to use it as an ointment, particularly in villages where medicines are hard to come by,’ she says.

She believes PNG has the potential to capitalise on the global shortage of coconuts, which is the result of a major boom in coconut consumption around the world, the long-term effect of natural disasters and demand outstripping the pace of coconut trees’ growth.

Within the next five years, she hopes to be a big manufacturer of coconut cooking oil and ointments throughout the Pacific.

‘By the end of 2017, we’ll be up and running with coconut cooking oil and we’ll be giving Indonesia a run for its money with its cheap imports coming into PNG.’

PNG ranks as the world’s 7th producer of coconuts, according to figures for 2014. It produces 1.2 million tonnes annually, behind Indonesia topping the rank with 18.3 million tonnes, followed by the Philippines (1.35 million tonnes).

Total world supply of coconut was 61.4 million tonnes in 2014, according to the Food and Agriculture Organisation of the UN.