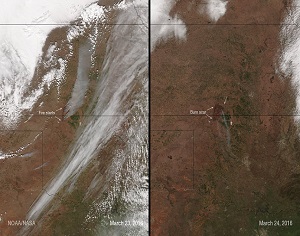 (Reuters) – Crews battling a wildfire that scorched about 400,000 acres in Kansas and Oklahoma braced on Friday for wind gusts to change direction overnight, as they sought to control a fire so big it has sent smoke streaming into Kentucky.

The fire started in Oklahoma on Tuesday and moved into Kansas, with strong winds on Wednesday making it eight times bigger and forcing voluntary evacuations in rural prairie towns that ended as winds died down on Thursday.

The main front of the fire was in Barber County, Kansas, where hundreds of firefighters had the blaze 15 percent contained on Friday, said Ben Bauman, spokesman for the Kansas Division of Emergency Management.

Firefighters expected the winds to shift overnight, which could spread flames in different directions, Bauman said.

Officials did not expect winds to strengthen compared to earlier on Friday though, when they blew at speeds of 15 to 30 miles per hour. The gusts failed to significantly expand the roughly 400,000-acre wildfire.

Earlier in the week, the blaze dubbed the Anderson Creek Fire was driven by winds of up to 60 mph as it exploded in size.

In Oklahoma, where the blaze continues to burn, firefighters earlier on Friday scrambled to get equipment in place ahead of what forecasters had predicted would be a blustery evening.

They were able to build a containment line and are hopeful it will hold, said Melanie Karns, a spokeswoman for a Texas-based team that is helping to battle the blaze.

“It’s going to be looking good in the next couple days hopefully, as long as we can stay ahead of it,” she said.

No injuries to people have been reported, but an unknown number of livestock have been killed by the fire, Bauman said. At least five homes have also been destroyed as it has burned across tall grass on ranches, he said.

The “burn scar” from the fire is so enormous that it is visible in weather satellite photographs posted to Facebook by Oklahoma Mesonet, a government weather site.

The cause of the fire was not yet known, authorities said.