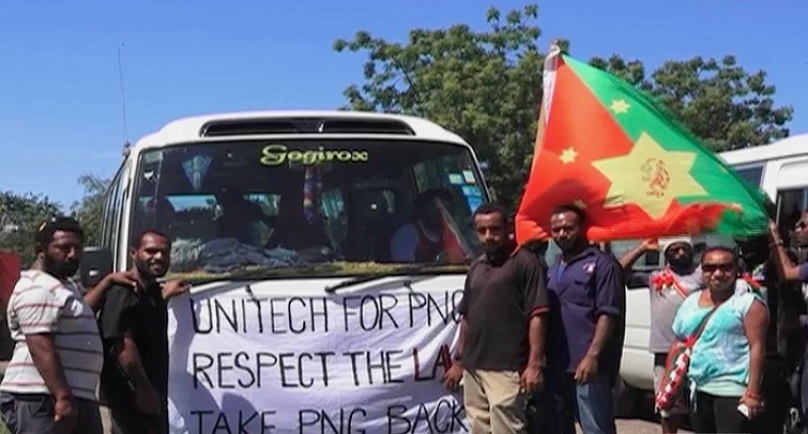 Morobe students in Unitech are calling on their political representatives to leave government ranks.

At the weekend, Morobe students organised a forum to express their views after sending out invitations to all 10 MPs of the province.

The forum was also attended by Ahi clan leaders and members of the Morobe Law and order committee.

Morobe students petitioned their nine district MPs including the governor, Kelly Naru to attend the forum on Saturday.

The students said their call for the Prime Minister’s office to be respected still stands.

“We are appealing to their conscience,” said student leader, Nagiob Jessie. “We want our MPs to make the right decision.”

Only three MPs attended – Humon Gulf MP, Ross Seymour, Bulolo MP, Sam Basil and PNC strongman and Kabwum MP, Bob Dadae. While Dadae was given the opportunity to speak, reactions from the student body were mixed as he outlined what the PNC under the PM’s leadership had done.

“Since taking office, PNC has had a rural focus,” he told students. “Lae City has received a lot of funding for infrastructure including K500 million for a four lane highway.”

But students have taken to social media, in particular, Facebook to target a large urban voting population made up mostly of Papua New Guineans aged between 18 and 40 with a message that the integrity of the office of the Prime Minister must be upheld.

Deputy Opposition leader, Sam Basil, told Students the opposition would be moving a vote of no confidence motion on today. He wants the issues raised by the student resolved in Parliament and by parliamentarians.

“Issues like this must be resolved in Parliament. It is the appropriate forum,” he said. “The fact that this has spilled over on to the streets is indication that we as parliamentarians have not done our jobs.”

PM congratulates the Queen on her Diamond Jubilee