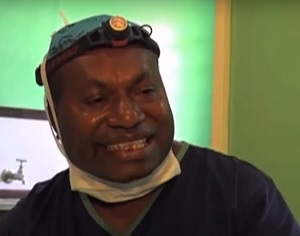 A Papua New Guinean eye team has been in Bulolo the past week on a mission to restore sights of dozens of senior citizens from the various rural local level government areas of the district.

The team has been removing cataracts and providing advice.

These are the patients who were identified through a district funded program which began last year.

Many of them come from some of the most inaccessible parts of the district – areas bordering Central and Oro provinces. All have serious vision problems that have become burdens for them.

The operations are delicate and done very quickly. Eye surgeon Dr. Alex Mel takes at least 15 minutes to work on each patient.

During the operation, the damaged lenses are extracted and replaced with artificial lenses while the patients are still conscious. Then, the eye is covered and they are allowed to leave the operating room.

For the team, the personal satisfaction is enormous. They came from Goroka and they leave for Niugini Islands in a few days to perform other operations.

The Statue Lady Queen of Peace During the Bouganville Crisis