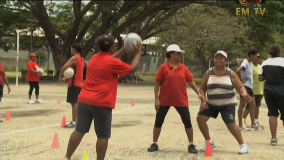 In Netball, it was a day solely for coaches, trainers and international players as more than 20 participants gathered for the Pacific Netball Partnership program.

The training program is the first phase of a netball partnership with Pacific Island countries starting with a roll-out program.

Netball is a universal women’s sport.

Telikom PNG Provides Internet for a School In Notorious Morata