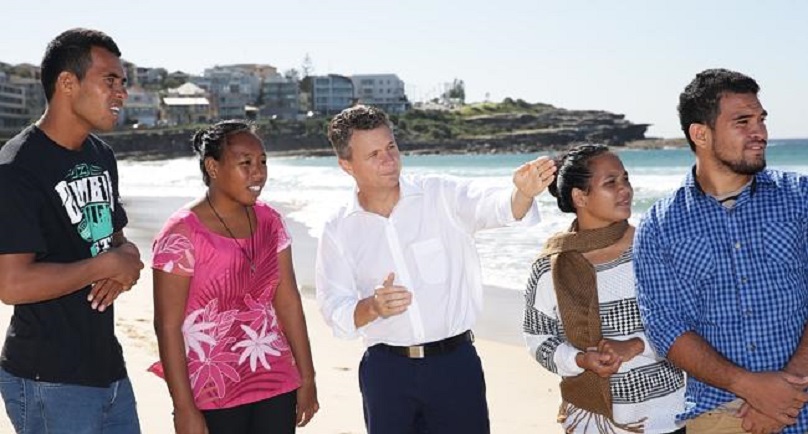 The effects of climate change are very evident especially in the Pacific islands. This was the reason that brought four young Pacific islanders from Tuvalu and Kiribati to travel down to Australia to bring their message, placing their fate in Australia to step in and do something about their plight.

The group were met by the Honourable Matt Thistlethwaite, of Kingsford Smith, on Tuesday at Sydney’s south-east Maroubra Beach.

Among the delegation of 4, is 20 year old Tiringate Iataake, who left her village, Banraeaba, for the first time.
With the same expectation like her group members, Iataake hopes that Australia can take action and contain the issue and the effects it has on her home.

“We came to Australia because we want to give our message to Australia that we are all suffering from the water rising from climate change. We don’t want to move to other countries … we know our country is small, but our culture is strong and that’s why we want to ask Australians how they are going to help us on this.” Iataake said.

With the recent category 5 storm sweeping through both countries in not more than a month ago, Kiribati’s leader, Meteka Reoi has blamed the powerful force of climate change saying that the destruction caused by the cyclone affected all their crops and their sustainable food, especially the coconut trees.

“Now we have to replant again, but it’s a bit hard now. The ground is salty from sand. Also our freshwater that we take from underground is all salty now. Now we have to go and get water from another place away from the village.” commented Mr Reoi.

Mr Thistlethwaite said that the message of climate action would re-sound an emotional attachment at the hearts of the Pacific community living in the South-east Sydney area with their own homelands.

“It highlights the fact that they don’t contribute much to climate change but they feel the effects of it more than most,” commented Thistlethwaite.

He also cited a number of researches that point out the amount of sea level rise. One research from the Climate Institute showed satellite images that indicated the sea level rise from 1993 to 2008. According to the institute, the rising sea level rate is about 8.1mm per year.