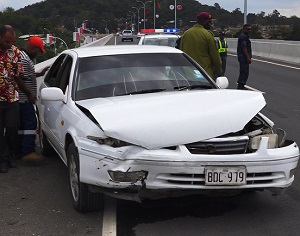 A travelling vehicle got squashed by an oncoming vehicle at the sections of the speedway at the wee hours of 12 pm today.

Just some minutes after the flyover accident, the Pacific Games security including the police, defence and correctional service personnel arrived to the aid of four people who had been traumatised by the impact.

The vehicle was completely squashed, however the passengers fortunately survived without sustaining any serious injuries.

According to the Police Traffic Officer, Samuel Noki, who was at the scene, said the identity of the vehicle is unknown and police are still looking for this hit and run vehicle.

Mr Noki said while having the Pacific Games, a significant event in the country, road users should be wary and drive responsibly to avoid road accidents.