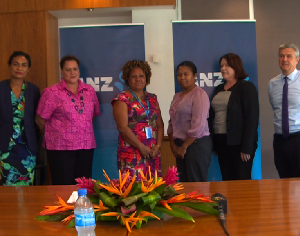 This year’s International Women’s Day will be celebrated on March 8, with the theme, ‘Make It Happen’.

He said the theme ‘Make It Happen’ encourages effective action for advancing and recognising women.

The upcoming International Women’s Day is a day to reflect on the achievements of the female population and the progress made towards gender equality.

These five women are a testament that women can advance to managerial levels, through hard work, adaptive to change, and a positive outlook.

According to the ANZ PNG CEO, Mark Baker, in the management team of eleven, five of them are women. This gives a fair representation of women from a number of countries, in business-decision-making.

He said lots of effort has been put in to promote diversity in organisations, yet progress has largely been quite slow.

A recent internal survey by ANZ Bank, showed that the lack of visibility hampered the progress of female employees.

He said ANZ has initiatives which encourage diversity at recruitment, and the Notable Women program which will see senior women from across ANZ receive specific coaching and support, to better equip them to be more visible and effectively engage with the media. Especially, within business networks and events.

Researches show that gender balance in the workplace leads to increased accessibility to markets, improved productivity and economic opportunity.

He said more can always be done to empower and recognize the female population of an institution who in turn will inspire and encourage the younger women leaders.