In Papua New Guinea, the ’23-footer’ is the standard water craft for coastal and inter-island travel—a critical mode of transport for the many communities which reside along its 5150 km coastline. For years, Ela Motors has sold the market-leading boat, supplied by global giant, Yamaha.

Two years ago, says Ela Motors CEO Takeshi Abe, discussions were held with the National Marine Safety Authority (NMSA) on the ‘new regulations coming up in PNG’ for boat safety. This led to the introduction of new safety equipment and other changes.

‘They wanted the boat to still be intact floating whilst it was in the water with people inside it.’

‘We had several meetings with the NMSA to clarify the requirements, then we asked Yamaha to design the new dinghy boat to match them.’ In terms of the number of units produced, he says the project is currently Yamaha’s biggest in the world.

Abe says there was a particular focus on the 23-foot boats staying afloat in all conditions.

‘They wanted the boat to still be intact floating whilst it was in the water with people inside it. So, we loaded the boat up with people and then flooded it. Even fully flooded, with people in it, it fully meets their requirements.’

The boats should carry eight passengers and each craft is supplied with eight life jackets. But they have been tested with more than 18 people.

‘We did testing with people in it and then filled up with the water to see if it still floated,’ says Abe. ‘This is what the NMSA was requesting. Whenever water comes into the boat, they want something that the passengers can stay in for a while until the rescue comes.’

Abe says Ela Motors has a Technical Assistance Agreement with Yamaha to produce the new boats. ‘We appoint the manufacturer and we appoint the factory,’ he says.

Ela Motors is the retailer. The boats are made by a company called Samarai Plastics (Samplas), and it’s making more than 1000 fibreglass boats a year.

‘We have in excess of a 90 per cent market share for Boats and Outboard motors.’

He says the factory was in Alotau, but it burned down in October 2016. Samplas is currently making the boats in a temporary facility. 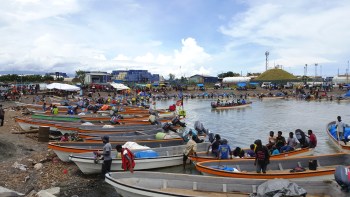 ‘Ela Motors is now setting up a new factory in Lae, into which Samplas will move and be the manufacturer. By August or October of this year, we should be able to return to full production.’

‘We have in excess of a 90 per cent market share for boats and outboard motors. Together with the Boat, Yamaha Enduro Outboards are the most popular model in PNG with its durability and reliability. 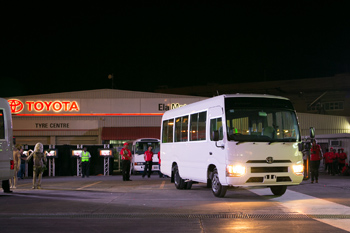 Ela Motors will also be bringing a new 25-seater bus to the market, an update of the Toyota Coaster. Abe says the company currently enjoys an 84 per cent market share in the segment.

‘The Coaster is the most popular People Moving Vehicle (PMV) in PNG.’ In the new Coaster model, he says, the interior and design will change. ‘Everything is different.’

‘In the factory in Japan, there is a production line specifically reserved for the buses for PNG.

‘To stop the torsion twist because of the condition of the PNG roads, it is necessary to reinforce the bus body frame,’ explains Abe. ‘It is the toughest Coaster Toyota makes.’

The new model will also have a reinforced roof to prevent it caving in if the bus rolls over. Abe says Toyota will also be also supplying a 30-seater bus, which is powered by the six-cylinder Land Cruiser engine.

PACER Plus Negotiation Concluded without Fiji and Papua New Guinea