A boom in new restaurants is improving the quality and variety of dining options in Papua New Guinea’s capital as never before, Business Advantage PNG reports.

A few years ago, diners had only a handful of options when eating out in Port Moresby. The Royal Papua Yacht Club and Aviat Club were social hubs but otherwise, if you wanted to eat outside a hotel, you had little choice beyond stalwarts like Asia Aromas in Town or Daikoku at what is now Harbour City.

How times have changed.

‘With further major redevelopment of the waterfront planned for coming years … the dining revolution in Town looks set to continue.’

The past year alone has seen over 20 new eateries open across PNG’s capital. The combination of a rising middle class and a permanently enlarged expat population–due to the advent of the PNG LNG gas project– has encouraged local investors to open new eateries, upgrade existing restaurants, and generally expand the tastes and quality on offer.

The opening of Steamships’ high profile Harbourside development in Town has undoubtedly provided an enormous filip. The site is now home to five restaurants: from the popular Duffy café to the recently-opened Italian restaurant, Sogno. Longstanding favourite Asia Aromas has relocated there, while Harbourside also offers quality Indian and seafood dining options in the form of Tandoor on the Harbour and The Naked Fish.

Harbourside’s waterfront location, with its uninterrupted views across the harbour, is undoubtedly a major attraction. Diners are able to choose between dining under the stars or enjoying air-conditioned comfort.

‘With PNG’s first Hilton Hotel due to open nearby in 2018, we can expect even more dining options in Waigani before too long.’

With further major redevelopment of the waterfront planned for the coming years, as Port Moresby’s port is relocated to Motukea Island and APEC Haus and the Paga Hill Estate are completed, the dining revolution in Town looks set to continue.

A short distance away, in Harbour City in Konedobu, the Mediterranean food and drink at Mojo Social is proving popular. The eatery opened in May 2016. 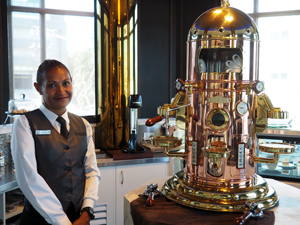 While Town is undergoing its own revival, the single largest growth in dining options is happening elsewhere: in the government precinct of Waigani.

The opening of Port Moresby’s largest hotel, the Stanley, in July 2016 and the expansion of the adjacent Vision City shopping mall (both owned by R H Group) have proved to be major drivers.

The Stanley itself is home to five new eateries, from the Silver Leaf Restaurant (fine dining) to the Monsoon Lounge (tapas). In-house guests can enjoy the barbecue on its pool deck.

Stanley Hotel guests, as well as visitors to Vision City, have a further three new upmarket dining options inside the mall: Korean Garden (Korean), Hosi Ramen (Japanese) and Bel Cibo (Italian). Add existing restaurants such as the massive Dynasty (Chinese), Ten (Japanese) and an attractive food court, and it is clear the location is now a major hub for ‘foodies’.

If R H Group has raised the bar for dining in Waigani, others in the area are showing they can rise to the challenge. Shortly before Christmas 2016, the renovated Lamana Hotel re-opened its public areas, with four stylish new eateries: the classy Café Palazzo, The Italian, Spices (Indian) and Port Moresby’s first Brazilian restaurant: Rio’s at the Temple.

PNG’s first Hilton Hotel is due to open nearby in 2018. We can expect even more dining options in Waigani before too long. 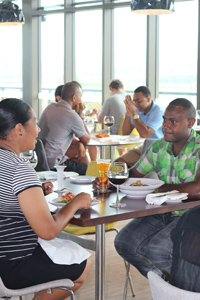 The advent of the Kumul Flyover in the past 18 months has improved access to Jacksons International Airport and its precinct, from Waigani. It is no surprise to see an expansion in the food on offer out at Six-Mile, too.

The Gateway Hotel, which is adjacent to the airport and is part of the Steamships-owned Coral Seas Hotels chain, has opened three new affordable food outlets in 2016: Enzo’s (pizza), Jacksons Restaurant (pizza, pasta and noodles) and Sizzler’s family-style grill.

Jacksons Restaurant, in particular, offers great views overlooking the airport, as does the celebrated Vue Restaurant at Airways Hotel, which is just 500 metres up the road. The Vue recently re-opened after extensive renovations. It looks a treat.

For diners, the greater variety will be welcomed. There are other flow-on benefits from an expanded restaurant scene. More competition is already leading to rising standards of service and food preparation; there is a larger market for quality locally grown fruit, vegetables, seafood and meats; and there are more employment opportunities for local workers.

State Team to Assess Breakdown of Vital Services in Misima

Honda to offer new fuel cell vehicle in California in 2016