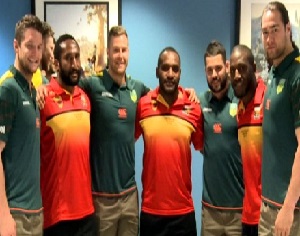 The team will be playing the PNG Kumuls tomorrow night at the Sir John Guise stadium.

The PNG Kumuls were also present at the reception, before the formalities were made, where time was given to the players and coaching staff to mingle.

She also said Rugby League is a powerful tool which can be used to raise awareness regarding issues affecting communities.

Chairman for PNG Rugby League, Sandis Tsaka, was present on the night to give his remark. He he made it clear that the PM’s 13 signifies the long relationship between the two countries.