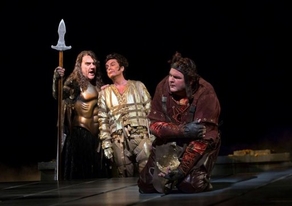 Retro, futurist, minimalist and powerful, the new production of Wagner’s Ring cycle was staged in full this month by the New York Metropolitan Opera, giving this classic work a new spin. The Met says the new version of the four-opera cycle — Das Rheingold, Die Walku00fcre, Siegfried and Gu00f6tterdu00e4mmerung — produced by Robert Lepage is the most ambitious production the Met has ever attempted, weighing in with a budget of $16 million.Although the four operas have shown separately, Tuesday was the concluding night of a first marathon session in which audiences could watch all 16 hours’ worth of performances in a period of just two or three weeks.Ever since Richard Wagner, who lived from 1813 to 1883, composed the extraordinary work, it has seen countless productions and become embedded in Western culture. What the Met is doing for the first time is in effect to add a new protagonist: the set.Unofficially dubbed the machine, it is a huge, moving structure of 24 aluminum planks that resemble a weirdly active piano keyboard.At 45 tons, it is minimalist but multi-purpose, allowing Lepage to conjure rivers, woods and mountains with nothing more than moving boards.

Surgery patients do better when hospitals are good to nurses