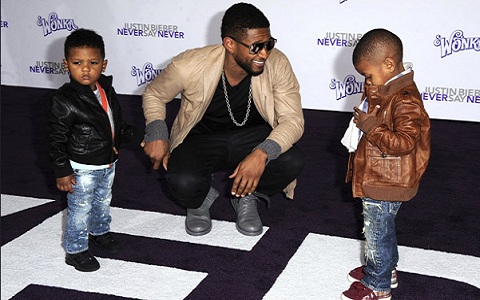 Usher may seem like his living the dream on TV but off camera he has been experiencing a lot of hardships.

The Confessions singer in his latest interview on Today Show revealed that one of his sons is battling type 1 diabetes.

Aside from the fact that the singer had lost his 11 year old step son from his marriage to stylist Tameka Foster in a boating accident, things haven’t gotten any easier.

“This year has been really one of my hardest years,” he shared. “I lost my grandmother, my son was diagnosed as being a type one diabetic. It has definitely been a difficult one for me.” he told Carson Daly on Today Show.

“Sometimes you’re looking at me and we’re off camera, and I’m online looking at numbers, trying to make sure he’s eating properly. It’s crazy”, the 35 year old said.

Usher is the father to six-year-old Usher Raymond V and five-year-old Naviyd, from his marriage to stylist Tameka Foster that ended in 2009.

And although ‘The Voice' Judge did not say which of his sons has diabetes, he definitely got emotional sharing his experience on getting his son to stick to the dietary requirements, his blood sugar levels are not too high and making sure everything else is in line.

With Insulin Therapy and a father like Usher, that little boy could most certainly live a long and healthy life