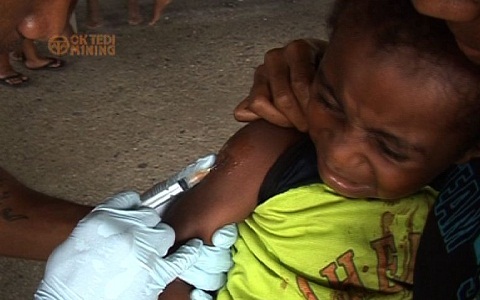 Health Authorities in Tabubil, Western Province have managed to contain the measles outbreak.

The mining township of Tabubil is located in the North Fly District. Health Officers at the Tabubil Hospital responded with the immediate vaccination of children.

Measles is a highly infectious viral disease that causes fever and red rash in children and if not treated quickly can claim lives.

Since the Measles outbreak in the mining township of Tabubil on December 13, Health Workers have vaccinated 2500 children in Tabubil and other villages in the North Fly District.

Samson Kove, the Manager for North Fly Health Services Development Program says their target is to vaccinate another 3, 500 children. Their efforts have been boosted by the National Health Department.

Health Authorities in Tabubil are also carrying out awareness programs aimed at educating people about measles.