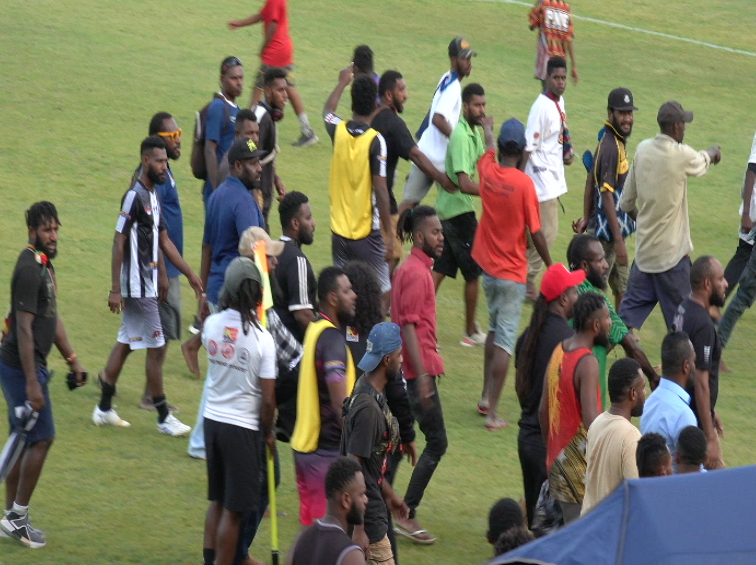 A press conference was held at the PNG Football Stadium following an incident that occurred right after the semi-final match between the Hekari United FC and the Gulf Komara FC over the weekend.

Present at the Press Conference to rectify the incident that occurred amongst the supporters of the Southern Conference semi-finalists, were PNG Sports Foundation President, John Kapi Natto, along with the NSL Executive Committee.

During President Kapi Natto’s address, he clarified that the incident erupted outside of the field and eventually reached the sporting vicinity. This further led to Youtube and social media posts relating to the incident that occurred.

“It was an outside matter that rolled into the playing field,” Kapi Natto said.

President Kapi Natto gave assurance that the law will be in full force in the grand final playoff of the Men’s NSL and the upcoming National Soccer League Tournament.

“We don’t want to bring law in but just because of what has happened, we need to call for full security to be here in the grand final and also in the national playoffs,” President Kapi Natto added.

Representing the NSL committee, Competition Manager, Ahmjad Tekwie said over the weekend, they will do their best to tighten up with security presence. That will be one of their main priorities.

Meanwhile, the grand final clash of the Men’s National Soccer League between the Hekari United FC and the Lae City FC is set to eventuate next week in Port Moresby.