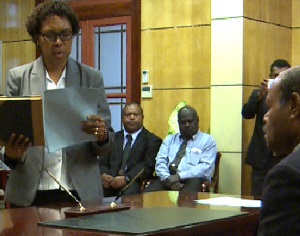 Phoebe Sangetari has been sworn appointed at second time to the post of Acting Chief Ombudsman, of the Ombudsman Commission.

Ms Sangetari is not new to the position, having been appointed as Acting Chief Ombudsman in 2012, a position she held for twelve months, following the death of then Chief Ombudsman, Chronox Manek.

Speaking to the media following her swearing in ceremony, Ms Sangetari said she was not oblivious to public criticisms about the efficiency and independence of the Ombudsman Commission.

“I assure the people of Papua New Guinea that I will perform my duties as Acting Chief Ombudsman without fear or favour, and according to the rule of law,” Ms Sangetari said.

She also explained why there had been a delay in the progress of matters before the OC, because of the vacancy in the position she had just been appointed to.

“Under the law, he is the only one that can do that. But my appointment now paves the way for me to do that, to progress the work of the Commission,” She said.

The new Acting Chief Ombudsman also highlighted, that the main challenge facing the efficiency of her office, is funding for their operations.

She said the Ombudsman Commission receives monthly grants from the government, and to date, have not been able to roll out any of their programs and operations, because they have not received their funding for July and August.