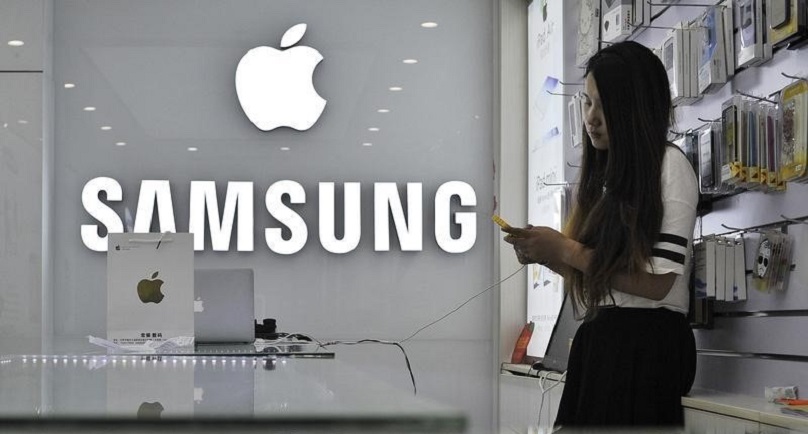 Image: A sales assistant uses her mobile phone next to the company logos of Apple and Samsung at a store in Hefei, Anhui province September 10, 2014. REUTERS/Stringer

NEW YORK (Reuters) – Samsung took to the U.S. Supreme Court on Monday in a last-ditch effort to pare back the more than $548 million in damages it must pay Apple for infringing the patents and designs of the iPhone.

Samsung’s petition must first be accepted for review by the Supreme Court. It is the latest step in a long-running patent lawsuit between the rival companies that epitomized the global smartphone wars.

In its petition to the high court, Samsung said it should not have had to make as much as $399 million of that payout for copying the patented designs of the iPhone’s rounded-corner front face, bezel, and gridded icons.

It said that awarding total profits from the sale of its devices with those designs, even if they relate only to a small portion of the phone, allows for “unjustified windfalls” far beyond the inventive value of the patents.

“A patented design might be the essential feature of a spoon or rug. But the same is not true of smartphones, which contain countless other features that give them remarkable functionality wholly unrelated to their design,” Samsung told the high court.

“Samsung is escalating this case because it believes that the way the laws were interpreted is not in line with modern times,” the company said in a statement.

Apple did not address the new petition, but said in a statement, “We make these products to delight our customers, not for our competitors to flagrantly copy.”

The South Korean electronics company’s quest to limit damages to Apple comes after the U.S. Court of Appeals for the Federal Circuit in Washington, D.C., the nation’s top patent court, in May stripped about $382 million from the $930 million Samsung owed following the 2012 verdict. The appeals court said the iPhone’s appearance could not be protected through trademarks.

Another trial over remaining damages relating to some of Samsung’s infringing products in the case is set for next spring.

In its petition on Monday, Samsung also told the Supreme Court that juries should not award damages on certain “functional” aspects of designs, such as flat screens, which allow for the reading of documents, or rounded corners, which make phones easier to slip into a pocket.