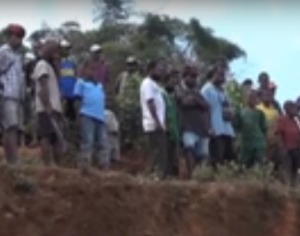 The Asai Adventist Primary School, a school in the Mabasap village of the Middle Ramu District in Madang Province, situated more than 2,000 feet above sea level was built by the community themselves.

This is a school born from the dream of a woman, Rita Asai, along with great support from her husband John Asai, and the other women of the village and their husbands.

“These semi-permanent double classrooms are now standing because of the willpower and strength of the women of this village. Our husbands joined later to help build and make it what it is today,” said an emotional Rita Asai.

Located North-East of Madang town, 2,500 feet above sea level, the semi-permanent school was built with sweat and blood, and out of the villagers own pockets.

“From very young children to elderly people who are able to carry the materials, we carried the materials shipped from Madang town to the Ramu River, and climb all the way up here. We are known as the ‘back page’ people, and no one will ever think of us,” Mrs Asai said.

Rita’s husband John was a proud man himself when the Middle Ramu MP, Tommy Tomscoll, visited the area to attend the school’s first Grade Eight graduation, and handed him the keys to a new truck, that will help transport them to and from Madang town.

“I am very happy, as well as everyone else in the community because the MP accepted our invitation, sponsored the graduation of our first grade eight students and is now here to present the awards to the students.

“We have been the ‘back page’ people for too long, we want to be on the ‘front page’ too,” said Mr Asai.

This school produced 26 Grade Eight students, two of which have scored 109 and 108 in their external marks against the whole of Madang Province.

“John didn’t go to a high school, in fact you grade eights beat John to being at the level that you are today, but John is your role model because his leadership has brought you here.

“Your challenge is to beat John, not in education but in leadership, and take this village to the country and the world map one day,” the Middle Ramu MP, Tommy Tomscoll, challenged the new graduates.

Rita Asai has been teaching the village’s children for seven years now, she’s not paid as the school is not registered, and the continuation of her dream is to be a recognised Primary School teacher.