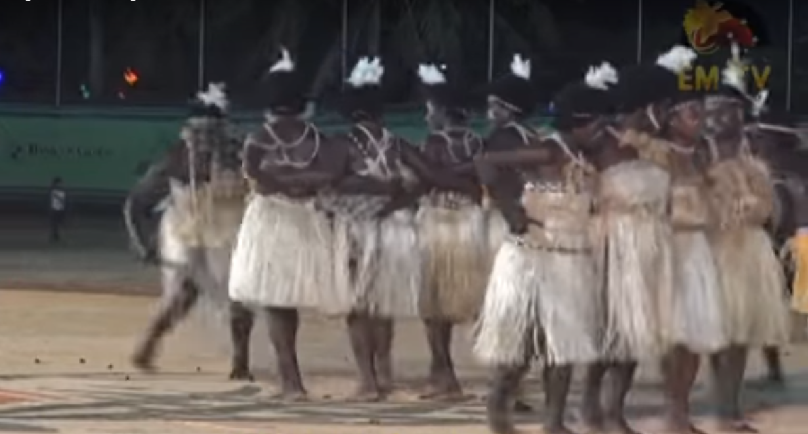 The Autonomous Region of Bougainville’s, beat of the bamboo band and pan pipes, has caught the attention of show goers to the 12th Festival of Pacific Arts in Guam.

While many may still be curious how these traditional musical instruments, produce sound, the knowledge and skills still remains with Bougainvilleans, as part of their unique culture.

These were the questions asked by the show goers at the Paseo Festival Village in Hagatna when the Autonomous Region of Bougainville displayed their performance.

The Airis Culture Group from Tinputz represented Bougainville and was the second group to showcase PNGs rich, diverse and diverse dynamic culture.

“It’s the beat of the bamboo band and pan pipes that are very unique,” one said.

The group also performed the ‘Wave Dance’ that signified that Pacific’s way of fishing.

Autonomous Bougainville Government’s Associate Minister of the Community Development Department, Robert Hamal Sawa, explains the wave dance, as an important dance to the traditional fishing methods of the people of Bougainville.

“One of the attraction is the wave dance, which is a fishing story similar in the Pacific,” he said.

For Bougainville to participate in this Pacific Arts Festival is a privilege and a great opportunity.

“This is the first time, Bougainville was chosen to participate in an international event, that celebrates the cultural heritage of the Pacific Island countries,”

“We the from the Autonomous Region of Bougainville are very proud to represent our country, Papua New Guinea to showcase our unique cultures,” he said.

IMO agrees on stricter efficiency targets for some ships