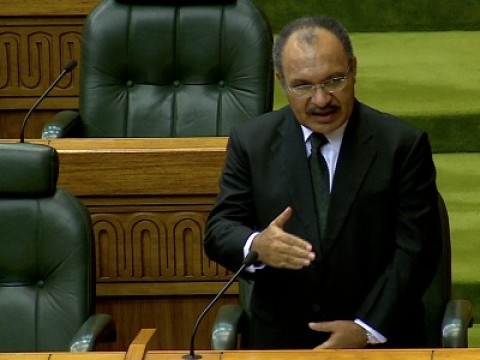 Prime Minister Peter O’Neill today called on the Ombudsman Commission not to impede the work of the executive government.

The Prime Minister met with Chief Ombudsman Rigo Lua and officers of the Commission on Thursday, during which he stressed the government’s support of their independent investigations into decisions of the Executive Government.

But he pointed out that those investigations must not impede its work or go against the nation’s overall interest.

The Ombudsman had directed a freeze on the interest payments on the UBS loan as part of its investigations. Such a freeze would trigger a default which would have disastrous consequences for PNG, including the loss of all the Oil Search shares and the gains made in the rise of the share price.

“If we default on this payment as a result of Ombudsman Commission direction, all the upside of our shares and what LNG project has delivered to us through Oil Search shareholding would be lost.

“It would also rattle and erode investor confidence in doing business with PNG.

“I respect the Ombudsman Commission and the work it does. And I’m sure the Commission realizes that the task of running the country lies with the executive government.

“The Executive Government makes decisions and enters into transactions on a daily basis in the running of the affairs of the country.

“I do not think it is wise for anyone to think that they have a right, or mandate, to stop the government from doing its work,” Mr O’Neill said.

“Our shares in Oil Search is a valuable investment for our people and we will do all we can to protect it.

“I made it known to the Chief Ombudsman that we respect them and will cooperate and provide all documents relating to this transaction in their ongoing investigation.

“But we will not allow them to place the entire investment in jeopardy,” the Prime Minister said.

“This particular direction will tarnish our country’s clean record of never defaulting on a loan or borrowing, with our credit ratings being down-graded.”

“We have now the highest level of confidence in the economy, the government and country as a result of good prudent investment the government is making in business, health, education, infrastructure and other sectors.

“Our early delivery of LNG to the markets has placed PNG in a desired position to attracting more investments.

We cannot afford to squander these opportunities.

That is why our Government will be seeking a Judicial Review on the directions issued by the Ombudsman Commission this week because we believe strongly that they have exceeded their constitutional responsibilities and that these directions are not in our country’s national interest.”

PNGSADO Steps Up on Drug Abuse