State petroleum company, Kumul Petroleum, sees its role in developing oil and gas projects in partnership with developers, according to Managing Director, Wapu Sonk. He tells Business Advantage PNG there is enough gas in Papua New Guinea for no less than five LNG trains. 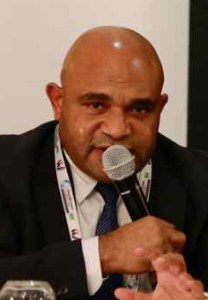 In the year since its establishment as the holding company for the PNG government’s stake in national oil and gas projects, Kumul Petroleum (KPH) has consolidated petroleum assets originally held by Petromin PNG Holdings and gas assets held by the National Petroleum Company of PNG (NPCP).

Those assets include the State’s equity in the ExxonMobil-led PNG LNG project, a 10 per cent stake in Oil Search and the 100 per cent ownership of Eda Oil (which has a 20 per cent share in the Moran Oil field in Southern Highlands Province).

It has also an MOU (Memorandum of Understanding) with Sojitz Corp of Japan to investigate the economic viability of developing a petrochemical industry.

‘We think we have enough gas for five trains. That would trigger more exploration and the commercialisation.’

‘The structure is that Kumul Petroleum operates on a standalone basis within the Act; it has its Board, which interacts with the Trustee who is the Prime Minister–who has delegated that role to the Petroleum and Energy Minister.’

Sonk is bullish about the opportunities.

‘Our overall picture of PNG is such that we think we have enough gas for five trains. That would trigger more exploration and the commercialisation of onshore and off-shore discovered gas that is otherwise considered stranded at the moment.’

‘Sonk says there would be a second pipeline out of Western Province.’

Sonk says he is interested in looking for ‘the marginal fields that can connect into a common carrier pipeline’.

The existing PNG LNG pipeline runs from the Highlands to Port Moresby. Sonk says there would be a second pipeline out of Western Province, which would be linked at Kopi and then twinned so that it runs down to Port Moresby.

‘Then you have another one coming from Gulf Province (Elk-Antelope) back into Port Moresby as well.

‘So, there would be three major pipelines heading into Port Moresby: two starting from the middle of the Western Province and the Highlands and the other one from Gulf Province.’

PNG’s Oil and Gas Act provides for KPH to have an option to take equity of up to 22.5 per cent when a project is being developed.

‘We don’t necessarily have to take the exploration risk. So, what we have done is to take out interest in fields that have already been discovered,’ he explains.

‘I think we will be looking at developing our own oil and gas projects at some point in time.’

‘As the company matures, I think we will be looking at developing our own oil and gas projects at some point in time. But, at the moment, it’s really working with strategic partners who have clear technical skills and the financial muscle to develop these fields with us.’

Sonk says it is important for PNG ‘to be on the front foot’ and ensure that the second LNG project is up and running at the projected time of 2021/2022.

‘So long as Total is the operator and Exxon is a strong partner it gives us certainty.’

‘Compare that to the complexity of the PNG LNG Project. The Papua LNG project will be easier to develop, particularly as there is a shorter distance between the source of the gas and the processing plant.’

‘So long as Total is the operator and Exxon is a strong partner, it gives us certainty to develop the Elk-Antelope field.’

Since the PNG LNG sales began in 2014, KPH has been receiving revenues, some of which the government expects as a dividend. At the same time, though, KPH needs capital for investment.

‘When it comes to dividend and revenue to Kumul, it is a very delicate balance that we have to manage and there’s several things in relation to that.

‘Firstly, the Act makes provision for us to keep money for five years.  So when we submit our plan we have to submit an annual plan, and a five-year plan. In the annual plan every year we also demonstrate that we’re putting aside money for what is in the five-year plan.

‘I don’t think it will be a problem when it comes time to raise the capital that we need.’

‘We have a very strong balance sheet at the moment, very low gearing. We have positioned ourselves to reserving capital and to look for partners.

‘Whilst being a state-owned entity, and passing on revenue to government, may be the downside of things, the positive is that we can use the Government to come into the relationship and access more capital with banks around the world.

‘So, I don’t think it will be a problem when it comes time to raise the capital that we need. Hence, we should be taking up the full 22.5 per cent as provided for in the Oil and Gas Act.’

Opinion: What Papua New Guinea taught me about doing business