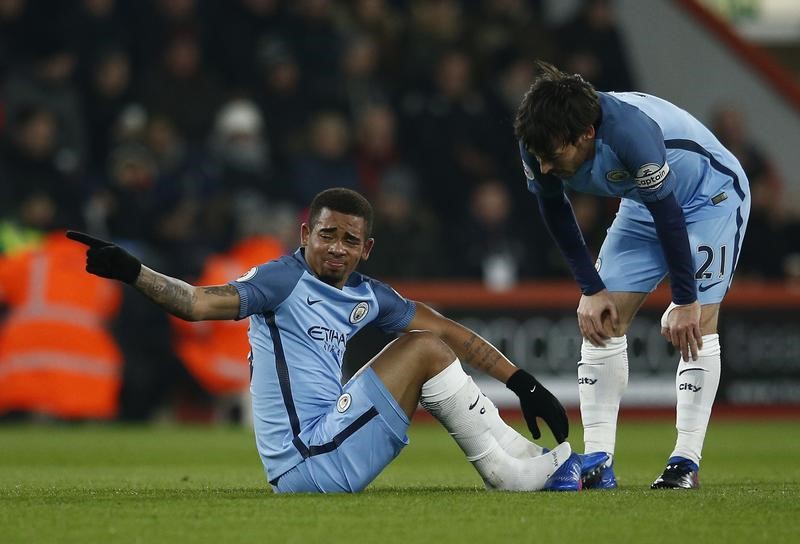 The 19-year-old, who came off after 15 minutes of the game, could face a long layoff but City gave no time frame and said further examinations of the metatarsal would be needed to establish the extent of his absence.

Such an injury to one of the five long bones in the foot could potentially rule the player out for the rest of the season, however.

Former England midfielder David Beckham returned after seven weeks when he broke his second metatarsal in 2002 but Manchester United’s Wayne Rooney needed 14 after breaking his fifth metatarsal in 2004.

City did not specify which metatarsal Jesus had broken but media reports indicated it was the fifth. The player was photographed with crutches and wearing a protective boot on his right foot.

An instant success at City, the teenager has scored three goals in five games since his 27-million-pounds move from Palmeiras in January and was included this month in the squad for the Champions League round of 16.

City, currently second in the Premier League but eight points behind leaders Chelsea, play Monaco at home on Feb. 21 before the away leg on March 15.

Preferred to the club’s top scorer Sergio Aguero in the starting lineup, Jesus bagged a double against Swansea City earlier this month in one of several eye-catching appearances.

Speaking at the Laureus World Sports Awards in Monaco, former Brazil fullback Cafu said he expected Jesus to return stronger and cement his reputation as a world-class player.

“Jesus will come back stronger. I think he has got the potential to become a world-class footballer. But calm down, he’s not quite as good as Ronaldinho, not yet,” he told Reuters.

“He has been given the chance to play football in England and he’s taking that chance with both hands.”

Impressed by how quickly Jesus has adapted to the English game, Cafu shared the credit between the player and City manager Pep Guardiola.

“It comes down to the player himself and his willingness to adapt to a new environment, to learn and to integrate with the rest of the team,” said the former Brazil captain.

“But at least 40 percent of that is about having a great coach that knows how to bring out the best in you.”