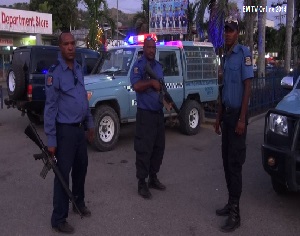 Quick actions by the NCD police have prevented what could have been a tragic incident involving a lone gunman.

A suspect in possession of a home-made gun was apprehended by police yesterday just as he was about to shoot at policemen.

The suspect has not come clear on who he was aiming to shoot at, nor has he justified his actions to police as to why he was carrying a home-made gun.

The incident occurred just after 6pm, when policemen were attending to an earlier incident at the Garden Hill settlement, where two suspects had smashed the windscreen of a police vehicle on Wednesday night.

The suspect was seen loading his home-made gun and police quickly surrounded him and disarmed the weapon.

He was then handcuffed and taken to Boroko Police Station, where he is currently being detained.

As of 1 o’clock this afternoon, no charges have been laid.

Despite this, Christmas night was generally quiet in most parts of the city with only minor cases reported; drink driving, the illegal sale of alcohol and disturbances from loud music were reported at police stations.