Papua New Guinea’s fishing industry faces fierce competition from Thailand and the Philippines, says Pete Celso, Chairman of the Fishing Industry Association (PNG). He believes a lack of control over imports is harming the local industry.

‘We have more than enough local manufacturers and canneries to supply the needs of the entire nation with surpluses,’ says Celso.

‘Here you are trying to encourage local producers to do it and yet we simply don’t have much control on all these imported items whose guidelines are a bit different from the local producers.

‘They can produce it much cheaper.’

‘To me it doesn’t make any sense because most of the tuna that comes back was the same tuna that was caught in PNG waters.

‘But they can produce it much cheaper because the cost of doing business is not only lower overseas, but their respective governments have built incentives which we don’t have here.’ 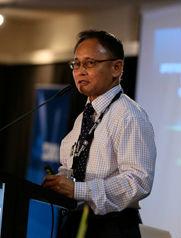 One proposal, designed to improve the local industry, is to establish a Pacific Marine Industrial Zone project in Madang Province. It is to have up to 10 tuna canneries and other port facilities, located on the Madang Lagoon.

The project has faced delays and cost increases, however. According to the EXIM Bank of China, which is a 78 per cent partner, the budget has blown out by US$61 million (K194 million) on top of the original US$95 million (K300 million) secured under phase one and additional finance is being sought.

The area will encompass 100 hectares for the industrial zone and 115 hectares for residential and commercial use.

Anton Yagama, the vice minister in charge of the project, hopes operations will begin in the first half of 2017.

Celso, who is Managing Director of R D Tuna Canneries in Lae, is positive about the project but says ‘the biggest challenge is to make it happen.’

He points to other issues facing the industry. One is the lack of foreign exchange. Another is the rising cost of doing business. Maintaining market access is a further challenge.

‘Europe is now trying to give the same benefit to a good number of countries whose cost of doing business is much lower.’

‘We used to be getting almost exclusive duty-free access to Europe, but Europe is now trying to give the same benefit to a good number of countries whose cost of doing business is much lower.’

PNG’s fisheries industry has the potential to be large. According to the World Wildlife Fund (WWF)  Melanesia’s ocean assets are worth a minimum of US$548 billion (K1.736 trillion).

The plans for Papua New Guinea’s fishing industry are ambitious. Prime Minister Peter O’Neill is on record saying his government’s aim is for the industry to become the largest tuna processing and canning hub in the region, ahead of Thailand and the Philippines.

He says another new cannery will be built soon, which he says shows ‘the strength of this industry’.

PACER Plus Negotiation Concluded without Fiji and Papua New Guinea