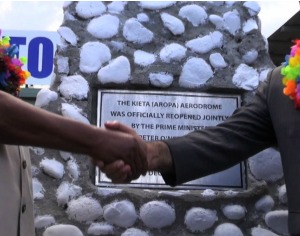 Landowners of the Aropa Airport, in Kieta, Autonomous Region of Bougainville, have pledged to ensure flight services are not disrupted.

Landowners made the pledge following the recent incident which disrupted operations at the airport early this week.

The landowners want the service to continue, as today marks the first anniversary since the opening on December 12, last year.

The airport was reopened after 25 years of closure since 1989, following the civil war on the island.

“When we went through the list of national airports, it said 22. But only 21 so when I asked, where is the missing, and they said, Aropa,” Tupiri said.

“After 25 years, Aropa Airport was opened, where people were left disconnected. Now they are happy,” the Minister said.

National Flag Carrier, Air Niugini, operates six weekly flights to Aropa and is proud of providing the service to Kieta.

General Manager Customers and Markets, Dominic Kaumu, said Air Niugini as the national airline was proud to bring back the service to Bougainville.

Meanwhile, landowners promised not to allow any more disruptions to flight service and will work together with the National Government to ensure service continues.