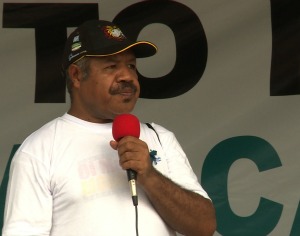 Governor for NCD, Powes Parkop, has donated K300,000 on behalf of the people of NCD to help minimise the number of women dying from cervical cancer in the nation’s capital.

The Governor is calling on the Health Department to address the staggering number of women dying from cervical cancer in the country.

Governor Parkop also pledged K200,000 to the HPV vaccination of girls between the age of 9 and 13.

The HPV vaccination will be carried out on March by the Rotary Club in the nation’s capital.

Parkop said that the mass of people turning up to walk for awareness of cervical cancer shows that they are fed up with the statistic of women dying.

Every year, almost 1,000 women are diagnosed with cervical cancer, however more than half do not survive.

Cancer foundation and other organisations are pushing to have more screening equipment in Papua New Guinea to reduce the number.