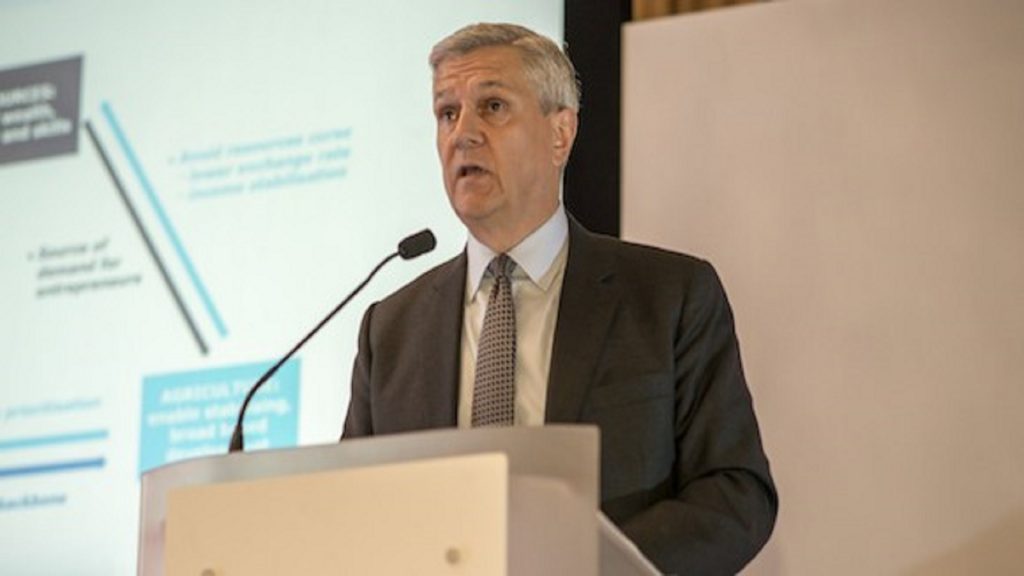 The Managing Director of ANZ Papua New Guinea, Mark Baker, has said the foreign exchange restrictions are not likely to ease until a major new resources investment comes in. But in the interim he believes the Government is connecting well with business.

Speaking at the UK-PNG Trade and Investment Forum in London, Baker said the lack of foreign exchange is impacting PNG business ‘across the country’.

But he noted that the government is ‘much more attuned to this issue’ than was the case previously.

‘Since the election the new Treasurer (Charles Abel) has met with CEOs and the four major banks on a number of different occasions.

‘This is a forum for discussion which we have previously not seen.’

Baker said there are few options for clearing the foreign exchange market other than to elicit a round of significant new resources investment.

‘In reality, to change the structural position it will require a major project to enter the construction phase—whether that will be Papua LNG with Total and Oil Search, Wafi Golpu with Newcrest and Harmony, or Frieda River and PanAust.

‘A lower kina would have inflationary consequences.’

‘These all are at various stages and all require some certainty from the PNG government in relation to various tax deliveries before major foreign exchange inflows will materialise.

‘I don’t see this changing significantly for around 12 months from now.’

Baker, in an observation that resembled comments by Loi Bakani, the Governor of the Bank of Papua New Guinea, argued that a lower kina would have inflationary consequences without necessarily having a positive effect on exports.

‘The pure economics suggest that this is the logical path to reach a market-clearing level.

‘However—and this is on a personal level, my own view—it is really not clear to me that PNG would sell any more exports with a more competitive exchange rate.

‘We understand the importance of taking a longer-term view of doing business in PNG.’

‘The country already sells all that it produces, be it gas, gold, copper, nickel, palm oil, coffee, cocoa.

‘The social impact of a 20 per cent, or similar, price rise for staple imports such as rice cannot be underestimated.

‘Foreign investors may welcome the lower rate, but I would argue that they are also motivated by legislative certainty, particularly around such aspects as land tax and the Mining Act.’

Baker said it is important to look at the longer term with the PNG economy:

‘At the most senior levels of the ANZ group, we understand the importance of taking a longer-term view of doing business in PNG.’

He implied that PNG has little choice but to encourage large resources investments but, because of its size, it will have difficulty absorbing the cyclical nature of the associated capital flows.

‘The revenues to the PNG government will come in various forms.’

‘The PNG economy is relatively small and not yet the size or breadth to really absorb major projects easily.

‘However, it does need these projects to, in an ideal world, fund investment in critical infrastructure and broaden the economic base.’

Baker said the long term prospects look sound, but he did warn it could take almost a decade for the benefits of current activities to flow through.

‘If we just look at the two-train [PNG] LNG project in isolation: the debt raising will be fully repaid by June 2026.

‘[There is] a further estimated 20-year mine from that point, which many actually believe to be conservative.

‘Since its commissioning, the plant has been producing well above the design capacity and over its life it will produce well over 11 trillion cubic feet of gas.’

Baker said the revenues to the PNG government ‘will come in various forms’ but he said by the mid-2020s they will change significantly, increasing sharply.

‘This is quite apart from the other projects.

‘The view from ANZ Research is that PNG would appear to be on the cusp of a super cycle in resources investment, particularly in gas, gold and copper projects.’