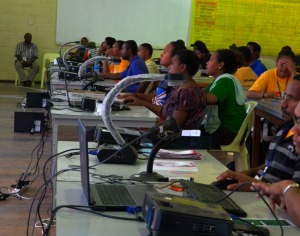 A handover report for a new PNG Electoral Commissioner points out areas of improvement that the PNG government must invest in, to see an efficient, and transparent 2017 National General Elections.

The report, compiled by Outgoing Commissioner Sir Andrew Trawen, emphasises the need to split the Highlands region into two, and increase manpower for the election operations.

Sir Andrew presented these to the both the Prime Minister,Peter O’Neil,  and Opposition Leader Don Polye, in his farewell speech last night.

“I am of strong views that the government should give grants to PNGEC and let the commission to manage the funds without delay and hindrance rather than begging the Treasury Department each month for monies appropriated for by elections that occur anytime,” Sir Andrew said.

With the approaching 2017 National General Election, Sir Andrew challenged the National Government to plan ahead. He said early planning will ensure smooth and successful conduct of elections.

“It is essentially important that the full five year cycle is funded by the national government which it is constitutionally obliged to do,” Sir Andrew said

His comments follow the limited K10 million in next year’s budgetary allocation for the PNG Electoral Commission for the 2017 National General Elections.

He said inappropriate funding over the years has contributed to many issues encountered during elections.

Sir Andrew has also proposed to introduce and continue the use of biometric and electronic voting system that will minimise illegal or multi voting in coming elections.