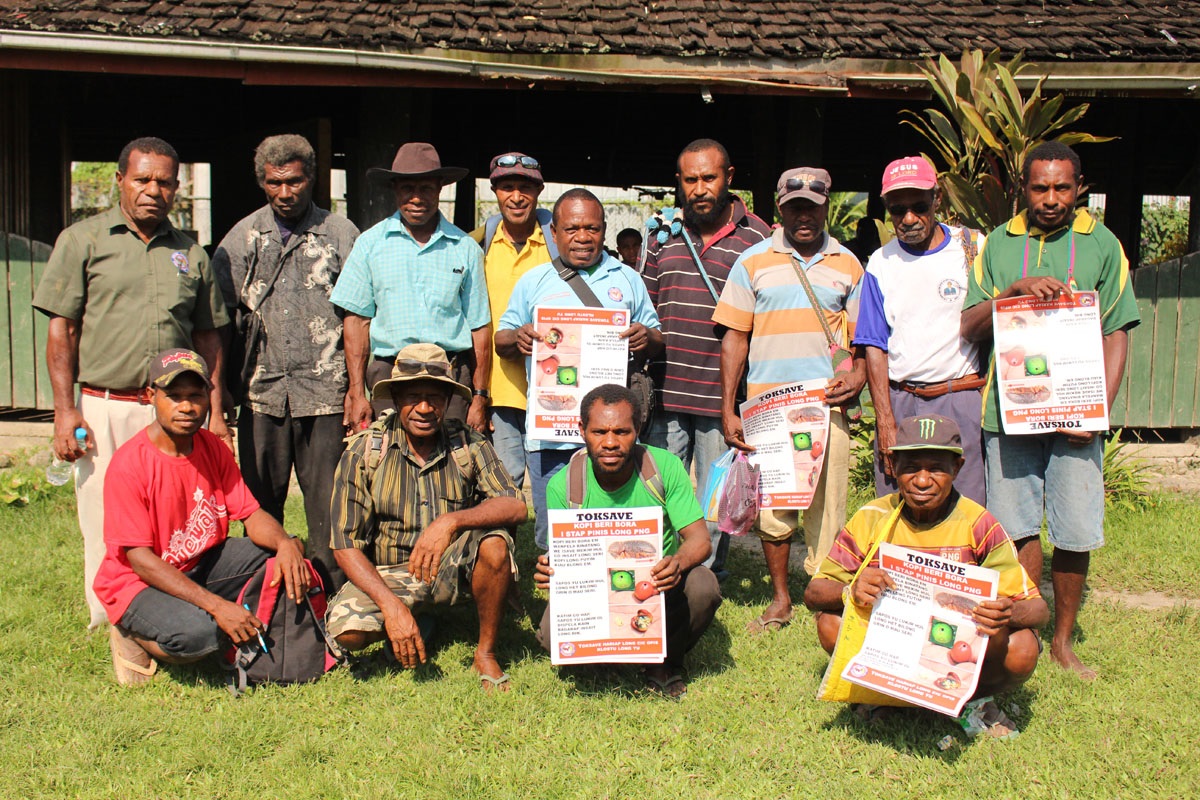 Image: Sepik Coffee Farmers Association after the meeting in Maprik of May, 2017

Most coffee farmers in the lowlands of Papua New Guinea do not make it into the limelight.

It is Tuesday, 23rd May 2017 as we start our journey just after mid-day to Division two in Angoram district.

We struggled through a 3-hour drive to reach our destination. Bad road conditions make the road trip unbearable; however, we were encouraged to continue the trip as the long time Didiman, Thomas Ainero tells us about his passion to grow coffee.

We were accompanied by the Momase Chairman for Smallholder Coffee Growers Association, Jerry Anisi, who also is another coffee ambassador that strongly promotes coffee production in Maprik.

Angoram district is a sleeping giant in terms of cash crop development because of its large population and the vast land mass.

Thomas tells us farmers are losing interest because of stagnant coffee prices over the years.

“The current factory door price per kilogram in Wewak is K1.20 for parchment coffee and the lowest it could go is K0.80 toea.

What is currently getting farmers on their feet is the current vanilla price, which is going for K700- K800 per kilogram in Maprik and Wewak.”

The breeding program on Omuru 1 carried out by Coffee Industry Corporation’s (CIC) research division began in 1994 and concluded in 2000 at the Omuru substation near Madang town. Nine distinct lines of Robusta clones were trialled and evaluated. Further evaluation was done and ended in 2006 in which Omuru 1 was officially recommended by CIC to be used by farmers.

Only three varieties were recommended from the nine lines for use based on its superior characteristics of yield and coffee quality. The three lines are PN91, PN94 and PN96.

A total of three nurseries were set up in 2008 in Angoram, Dreikikier and Maprik districts to serve coffee farmers. However, due to funding and logistical issues, the Angoram nursery is the only one serving coffee farmers in the province.

Before the vanilla boom in 2006, there was no coffee coming out of East Sepik Province. When the vanilla prices made a downturn thereon, the CIC introduced coffee cultivation and group marketing into areas in Angoram, Dreikikir, Wosera Gawi, Yangoru and Maprik.

For farmers like Thomas and others in the business, the challenges are undeniable.  From low factory door prices to transportation costs, they are forced to accept these realities and have demonstrated perseverance during a time when the province is experiencing a hike in vanilla prices.

Chairman for Smallholder coffee growers association in East Sepik, Jerrry Anisi, told us that he had witnessed a buyer purchasing vanilla in Drekikier for K1,000 last month and was very disheartening for coffee farmers.

Robusta farmers make up 5 percent of the total coffee production with the top producers from Ambunti, Drekikier, Maprik and  Wosera Gawi. East Sepik’s annual production for the past ten years has settled on an average of 1,459 green bean bags. And this comes from more than 800 farmers in the province.

The majority of the farmers expressed concerns on establishing a central dry mill in Maprik that would ease the current hardships with transportation costs all the way into Wewak for processing into green beans, and getting their payments on time. Currently, farmers wait for 4 to 6 months to receive payments from their coffee sales after being shipped into Lae for exports of their green bean coffee.

Patrick Biahicga is a farmer in Maprik who says bringing his coffee bags from Wamsok to Saunes takes 4-6 hours and costs K13-K15 per bag to transport them into Wewak for processing. “We desperately need good roads and bridges to make things easier for us.”

Pacific Agro Limited is the only company that processes all smallholder coffees in East Sepik. Farmers and groups have been using their services for the past 12 years and things have not changed for them.

Dr Simbiken praised the efforts by the East Sepik farmers and told them their interest and participation to continue on was a message of hope for the industry. He told the group that CIC will be supporting them with incentives to boost what they have started.

This will come in the form of integrating other complements such as honeybee, galip nut and central coffee nurseries. The first shipment for 600 galip seedlings is expected to be made next week into East Sepik. Galip nut will be integrated with Robusta coffee as a shade tree and in return farmers could compliment their coffee earning with the nut fetching around K20-K30 a kilogram.

In addition to that, CIC’s freight program has assisted by purchasing a Toyota truck in 2015 that has been transporting farmer coffees to Wewak and paying upfront fees to Sepik Coastal Shipping Agency to bring farmer coffees to Lae. The program is expected to continue to provide that service as an incentive to farmers.

At 340 metres above sea level, a 64-hectare land area has been given by elders in Wawat in the Angoram District for nursery development as farmers are eager to expand and increase production.

CIC Chief Executive Officer Mr Charles Dambui expressed gratitude to farmers in East Sepik for still believing in coffee and still attending to their gardens during trying times with the vanilla advantage. “These are the coffee champions in East Sepik and West Sepik Provinces.”

He said farmers concerns have been taken note of and plans are underway to seek the best possible way to relieve them from their current situation. He also made an appeal to provincial and district administrations in the province to come forward and assist the hard working farmers.

Thomas Ainero working on his coffee nursery at his block in Division 2, Angoram District.