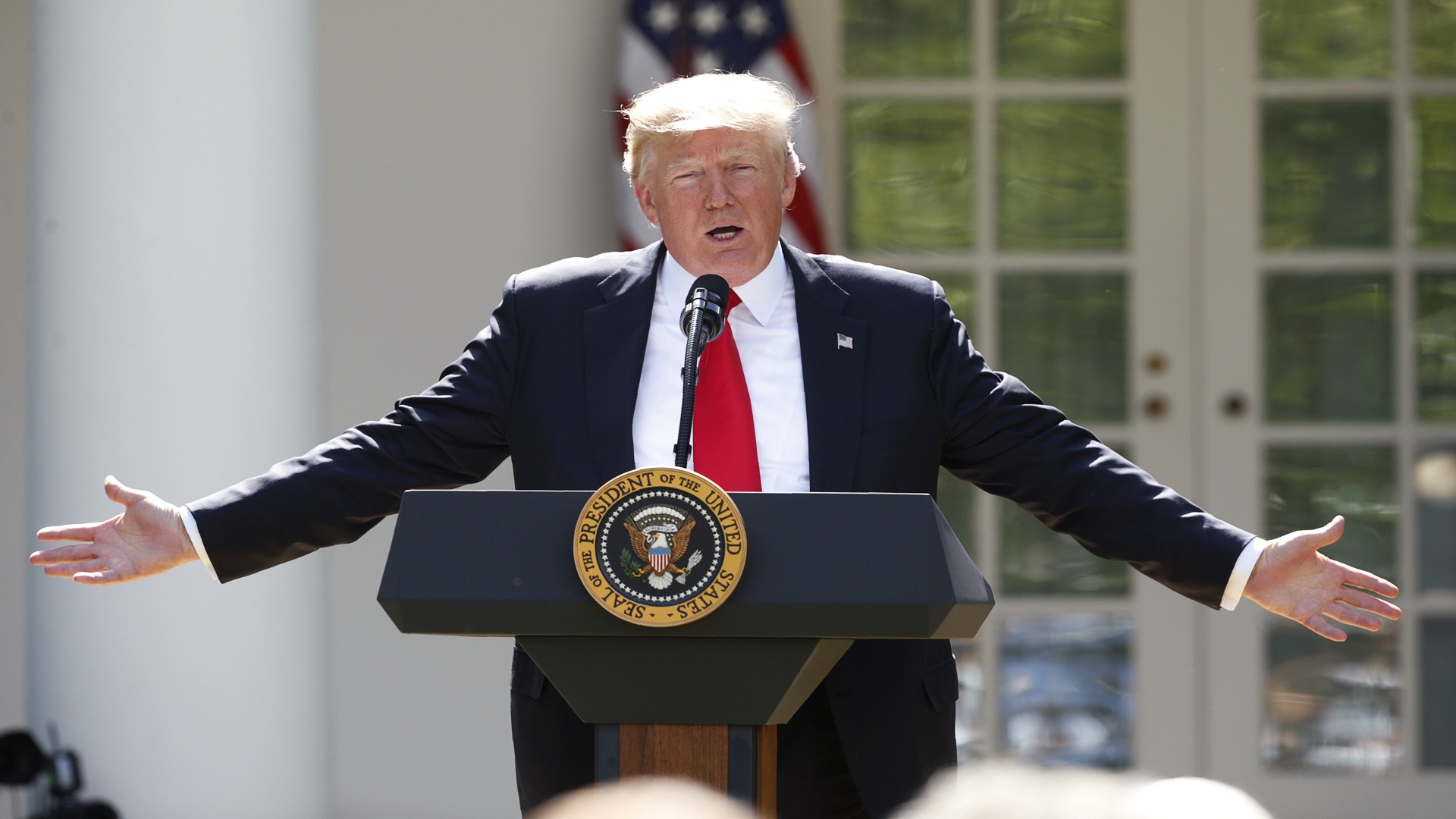 Image: U.S. President Donald Trump announces his decision that the United States will withdraw from the landmark Paris Climate Agreement, in the Rose Garden of the White House in Washington, U.S., June 1, 2017. REUTERS/Kevin Lamarque

By Valerie Volcovici and Jeff Mason

WASHINGTON (Reuters) – President Donald Trump on Thursday said he will withdraw the United States from the landmark 2015 global agreement to fight climate change, spurning pleas from U.S. allies and corporate leaders in an action that fulfilled a major campaign pledge.

Supporters of the accord condemned Trump’s move as an abdication of American leadership, an international disgrace and a monumental foreign policy blunder. His predecessor, Barack Obama, expressed regret over the pullout from a deal he was instrumental in brokering.

“We’re getting out,” Trump said at a ceremony in the White House Rose Garden in which he decried the Paris accord’s “draconian” financial and economic burdens. He said American withdrawal “represents a reassertion of American sovereignty.”

Trump said the United States would begin negotiations either to re-enter the Paris accord or to have a new agreement “on terms that are fair to the United States, its businesses, its workers, its people, its taxpayers.”

U.S. allies voiced dismay over Trump’s move, and France, Germany and Italy dismissed his suggestion that the global pact could be revised.

Trump said the United States would cease payments to the U.N. Green Climate Fund, in which rich countries committed billions of dollars to help developing countries deal with floods, droughts and other impacts from climate change.

The United States was one of 195 nations that agreed to the accord in Paris in December 2015. But Trump said the accord would “undermine our economy, hamstring our workers, weaken our sovereignty, impose unacceptable legal risk, and put us at a permanent disadvantage to the other countries of the world.”

“We don’t want other leaders and other countries laughing at us any more. And they won’t be,” Trump added as he tapped into the “America First” message he used when he was elected president last year.

Under the pact, which was years in the making, nations both rich and poor committed to reducing emissions of so-called greenhouse gases generated by burning fossils fuels and blamed by scientists for warming the planet.

“I was elected to represent the citizens of Pittsburgh, not Paris,” the Republican president said.

Obama, a Democrat, said in a statement that the nations that remain in the agreement will be the ones that reap the benefits in jobs and industries created.

“But even in the absence of American leadership; even as this administration joins a small handful of nations that reject the future; I’m confident that our states, cities, and businesses will step up and do even more to lead the way, and help protect for future generations the one planet we’ve got,” Obama added.

“Climate change is real. Leaving Paris is not good for America or the world,” Musk said in a Twitter post.

General Electric CEO Jeff Immelt said he was disappointed, adding, “Climate change is real. Industry must now lead and not depend on government.”

Senate Democratic leader Chuck Schumer called the decision “one of the worst policy moves made in the 21st century because of the huge damage to our economy, our environment and our geopolitical standing.”

“At this moment, when climate change is already causing devastating harm around the world, we do not have the moral right to turn our backs on efforts to preserve this planet for future generations,” added U.S. Senator Bernie Sanders, who sought the Democratic presidential nomination last year.

The Democratic mayor of the city mentioned by Trump, Pittsburgh’s Bill Peduto, quickly chimed in that his town long known for the steel industry actually embraced the Paris accord.

Under the pact, the United States had committed to reduce its emissions by 26 percent to 28 percent from 2005 levels by 2025. The United States, exceeded only by China in greenhouse gas emissions, accounts for more than 15 percent of the worldwide total.

Trump during last year’s presidential election campaign promised voters an American withdrawal. He has expressed doubts about climate change, at times calling it a hoax to weaken U.S. industry.

U.S. supporters of the pact said any pullout by Trump would show that the United States can no longer be trusted to follow through on international commitments.

International leaders including the pope had pressed Trump not to abandon the accord.

Despite pressure from allies in the Group of Seven rich nations at a meeting in Italy last week, Trump had refused to endorse the agreement, rebuffing leaders from Canada, France, Germany, Italy, Japan and Britain.

EU, CHINA TO COMMIT TO IMPLEMENTATION

Virtually every nation voluntarily committed to steps aimed at curbing global emissions of “greenhouse” gases such as carbon dioxide generated from burning of fossil fuels.

Last year was the warmest since records began in the 19th century, as global average temperatures continued a rise dating back decades that scientists attribute to greenhouse gases.

They warned that U.S. withdrawal from the deal could speed up the effects of global climate change, worsening heat waves, floods, droughts and storms.

China, which overtook the United States as the world’s biggest emitter of greenhouse gases in 2007, and the European Union will seek on Friday to buttress the Paris agreement, with Li meeting top EU officials in Brussels.

In a statement backed by all 28 EU states, the EU and China were poised to commit to full implementation of the agreement, officials said.

Oil majors Shell and ExxonMobil Corp supported the Paris pact. Several big coal companies, including Cloud Peak Energy, had publicly urged Trump to stay in the deal as a way to help protect the industry’s mining interests overseas, though others asked Trump to exit the accord to help ease regulatory pressures on domestic miners.