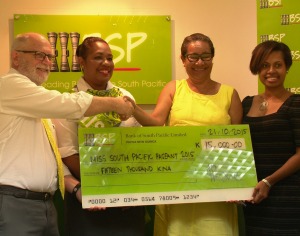 BSP Group General Manager, Retail Banking, Paul Thorton, said the bank was proud to be associated with a pageant that develops and showcases young women’s intellectual strengths and cultural values.

At a media conference in Port Moresby today, Thorton formally announced the 23-year-old as Miss BSP.

From a mixed parentage of West New Britain and Central Provinces, Samantha is employed by her sponsor, BSP, as an Administration Officer.

She has a Diploma in Human Resources Management and aspires to build her qualification and progress her career.

Over the last four years, the Miss Pacific Islands Pageant PNG has raised over K400,000 for its scholarship fund. Over 100 young women from around PNG have benefited; completing their education thanks to this scholarship fund.

Vulum said she is happy to be part of a bank that is making a difference not only in business, but in communities nationwide, making a meaningful and lasting difference in PNG.

The prowning of the Pageant will be held on November 14. The winner will represent PNG at the Miss Pacific Islands Pageant in Rarotonga, Cook Islands in December.