At 4.00pm in front of international dignitaries, observers and scrutineers, Mr Ahern, thanked the people of Bougainville for turning out in such large numbers to cast their vote, in an orderly and even celebratory way. 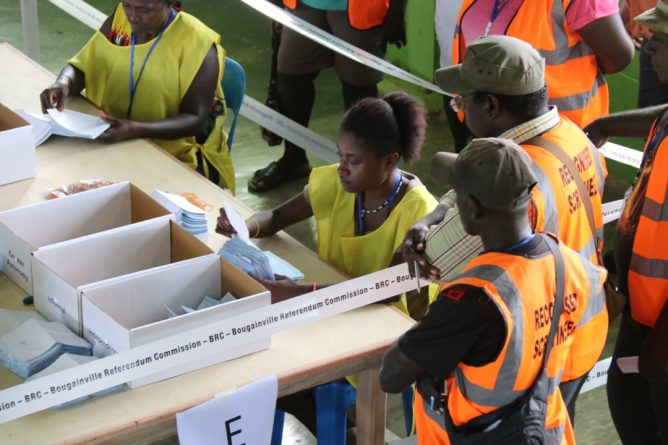 “Around 85% of the total people on the referendum roll have cast their vote in an environment that was conducive to a free, fair and credible process”, Mr Ahern said.

“Voting has been in the spirit of the larger peace process, of which this referendum is just one part.”

“It’s a credit to all – and it’s a good news story that is being retold around the world.”

Mr Ahern thanked his Commissioners, the Chief Referendum Officer and Returning Officer for their diligence and hard work.

“We have a great team in place, including thousands of polling and counting officials – and they’ve all played their part with the support of the UN, the international community and advisors.”

“It’s hot and hard work, walking up and down mountains with ballot boxes tied to your back, visiting remote atolls and managing poor roads and communication networks – so well done everyone.”

The scrutiny and count continues to be observed by over 100 scrutineers, observers and the media.

“We’ll continue to work according to the rules, in an open and transparent manner – but also honour the international principles of the secrecy of the vote,” Mr Ahern said.

BRC will formally announce the result once all counting is complete: the total number of votes for greater autonomy, independence and total informal ballot papers.

Mr Ahern said officials will complete the count as quickly as possible, but as slowly as is necessary to ensure everything is by the book, and allows the scrutiny of observers, scrutineers and the media.

Murder Suspect On The Run