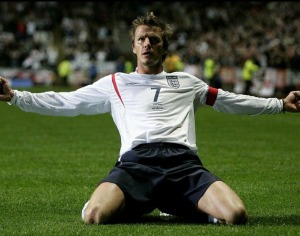 Admired around the world for his skilful and powerful kicks on the field, David Beckham is arguably one of the best footballers that has ever lived.

Apart from the glamour of being a football superstar, the retired soccer player has been working with UNICEF as a Goodwill Ambassador.

David Beckham in 2005 was appointed UNICEF Goodwill Ambassador with a special focus on UNICEF’s Sports for Development Program.

The former England captain announced earlier this month that he will lead a Great Britain XI team to play the rest of the world team lead by Zinedine Zidane to raise funds for charity, but that’s isn’t the end of his plans for charity .

This year marks his 10th anniversary as UNICEF’s Goodwill Ambassador and Beckham hopes to embark on a remarkable world tour to benefit UNICEF.

To mark his 10th anniversary working with UNICEF, Beckham hopes to compete in seven games across seven continents over seven days and is expected to appear in Uganda and Papua New Guinea.