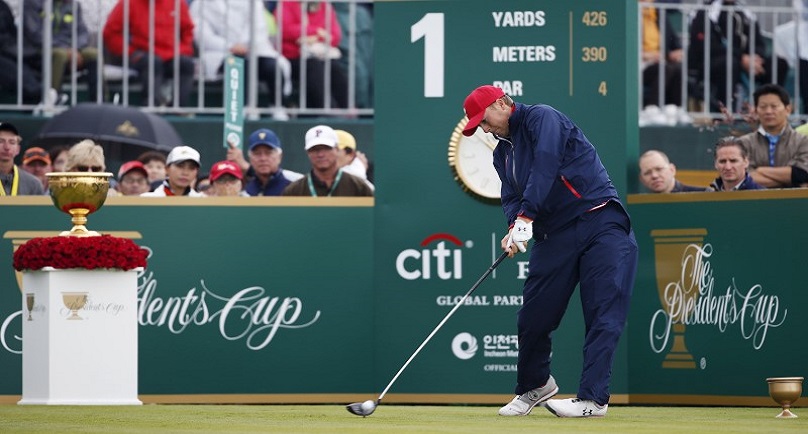 By Larry Fine
(Reuters) – A changing of the guard in professional golf is in full swing and early returns show that the sport’s young guns are drawing viewers even as Tiger Woods fades from the spotlight, says Golf Channel president Mike McCarley.

“2015 is going to match the highest-rated year ever on Golf Channel, matching 2013, the year in which Tiger won five times,” McCarley told Reuters in an interview.

That was 20-year-old Golf Channel’s previous high-water mark in terms of television ratings and the last splash from Woods, who won five of 16 tournaments he played in 2013 and was named PGA Tour Player of the Year for a remarkable 11th time.

Since then, back injuries have derailed the nearly 40-year-old Woods, but the rise of Jordan Spieth, Jason Day and Rickie Fowler to join 26-year-old Rory McIlroy in golf’s elite has captured the attention of golf viewers.
“Looking back, 2015 may have been the changing of the guard,” said McCarley, whose channel is available to some 80 million households in the United States and whose programming reaches more than 80 countries worldwide in 12 languages.

The next era for golf is likely to contrast with the reign of Woods, who dominated the game and carried fan interest on his shoulders, and McCarley sensed that a new age of rivalries was looming.

“These are young players who are going to be around for 20 years and it will take some time for them to build their fan bases,” he said. “We’re on the very leading edge of this trip, but we’re seeing the momentum build significantly.”

Spieth got the 2015 major championship season off to a flying start with his decisive win at the Masters, and followed that with victory at the U.S. Open two months later.

The Texan, who is now aged 22, made a run at winning a third in a row, finishing one shot out of a playoff at the British Open and then was runner-up to 28-year-old Day of Australia at the PGA Championship.

Fowler, 27, joined the party with a playoff victory at The Players Championship, while four-time major winner McIlroy will be back at full strength after being sidelined in midseason by an ankle injury sustained playing football.

GREAT RIVALRIES
“I think rivalries are great for the game,” the Golf Channel chief said. “Sports are driven by stars, but when you have stars who also have rivals and they are battling it out on a regular basis I think it can be really, really compelling.”

The 2015 first quarter ratings for Golf Channel were down 14 percent compared to the year before, but momentum shifted with Spieth’s win at the Masters.

The second quarter showed a gain of 3 percent over the year before and grew to an increase of 8 percent in the next quarter before booming to a 13 percent year-ago gain in the last period.

McCarley noted a competitive parallel in the women’s game with the rise of 18-year-old Lydia Ko of New Zealand as world number one and a natural rivalry with American Lexi Thompson, the 20-year-old world number four.

“Looking ahead, 2016 is shaping up as a transformational year for the game of golf,” he said.

McCarley also pointed to golf’s return to the Olympics for the first time since 1904 at next year’s Rio Games.

“You have to look at the Olympics as a real opportunity for the game of golf, a long-term opportunity,” said McCarley, whose channel will broadcast the men’s and women’s Olympic tournaments live in their entirety.

“I think the Olympics in Rio will start spreading a seed for the global growth of the game,” he said.

“Countries are developing junior golf programs, grass roots programs they would never have developed if not for golf being included in the Olympic program.

“You’re going to start seeing kids in countries who never wanted to pick up a golf club and now they do.”