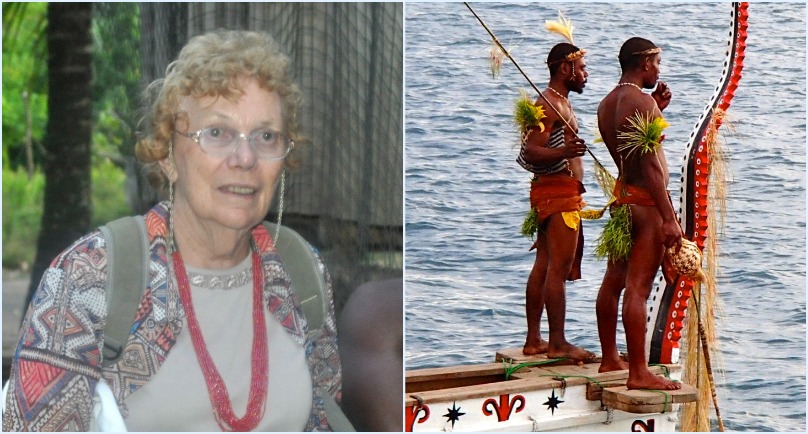 A long time ex-resident of Madang, Mary Mennis, has just spent the past month in Madang volunteering her help in restoring the various exhibits and categorising items culminating in a new look “Haus Tumbuna”.

Mary Mennis’s background goes back to 1971 when she and her husband Brian arrived in Madang.

Brian was the Lands Officer with the Department of Lands, whilst Mary did research and writing on pottery, sailing canoes that has resulted in a number of books including:

In addition, she has produced research papers depicting the precolonial and colonial period of Madang and PNG.

Mrs Mennis wrote two historical books based on Nicholai Mikloucho-Maclay, the famous Russian naturalist who settled at Garagassi Point and Gorendu Village on the Rai Coast in 1871.

Chairman of the Madang Visitors & Cultural Bureau, Sir Peter Barter, said that a lot of work has been done in 2015 to restore the Haus Tumbuna (Provincial Museum), one of the largest in Papua New Guinea.

This was largely organised by the “Friends of the Museum” and funds were raised in hosting independence functions and admission charges.

On 5th of June, the Friends of the Museum will be hosting the official Madang Festival Dinner at the Madang Resort where 30 tables of 10 will be sold.

Again on 16th September, another dinner will be held to celebrate the 40th Anniversary of Independence.

Further funds are being raised by selling permanent diplay booths within the Haus Tumbuna to business houses who will take ownership of the specific function of the booth.

The first of these booths have been assigned to Heritage Oil, the Madang resort and Madang Lodge and Apartments.

Sir Peter said that the Provincial Government recognises the contribution the private sector has made, he is confident funds will be allocated to sustain what exists and will enable the work to extend to the Districts.

The interior is now being divided into approximately 12 booths, each booth depicting the pre colonial history, followed by the German, Australian, Japanese and now the Independent state of PNG periods.

The booths will also contain displays of pottery and canoes including the Balengat Trading Canoes, head dresses, cooking utensils, traditional jewellery, architecture and artefacts from Madang and surrounding provinces.

When completed, it will become an educational tool for young people to learn their past and encourage them to retain their rich cultural heritages. It will also continue to be a tourist attraction for visitors to Madang and become the centre of cultural activities throughout the Madang Provnce.

Sir Peter thanked Mary Mennis and other volunteers for thier contribution on behalf of the friends of the Museum and the Madang Vistors and Cultural Bureau. Their commitment to helping Madang preserve their rich cultural heritage is very much appreciated and we hope that others follow this example.