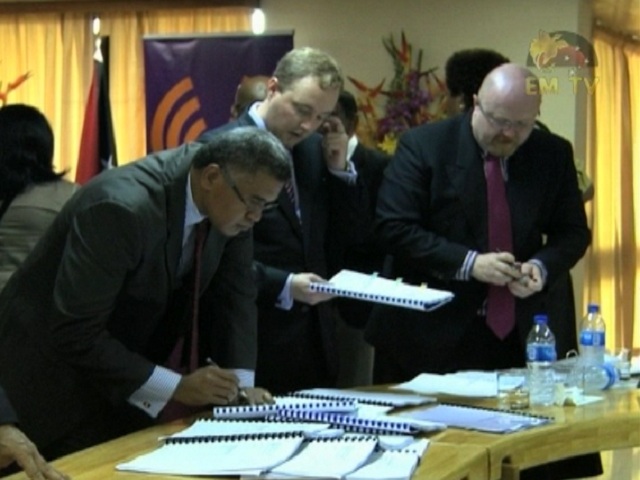 The formalities are in place…,thPNG Government through its commercial arm, IPBe andthe Fiji National Provident Fund are joint investors in BemobilPNG Limited.

The local mobile phone company will now be managed under a management contract by Vodafone Fiji Limited.

The local media and counterparts from Fiji were at parliament to withness one of Fiji’s biggest investments in Papua New Guinea an historic joint venture that futher consolidates bilateral ties between both nations.

Present for the signing ceremony was Prime Minister Peter O’Neill and his Fijian counterpartoCommodore Frank Beinimarama.

Ofthe remaining 10%,the Asian Development Bank has acquired 0.99% shares and Capital Way with 8.01%. The Pacific Way Shareholding is broken up into Steamships, Nambawan Supa, Pacific Rumana, FasfundPNGSDP and GEMS.

And NEC has approverd Vodafone Bemobile Beard members which include Andrew Johnson as Chairman, and Wasantha Kumarasiri and Paul Komboi as Directors representing IPBe.

Meanwhile Prime Minister O’Neill has announced that both countries have agreed that visa issues will be relaxed to encourage more travel.