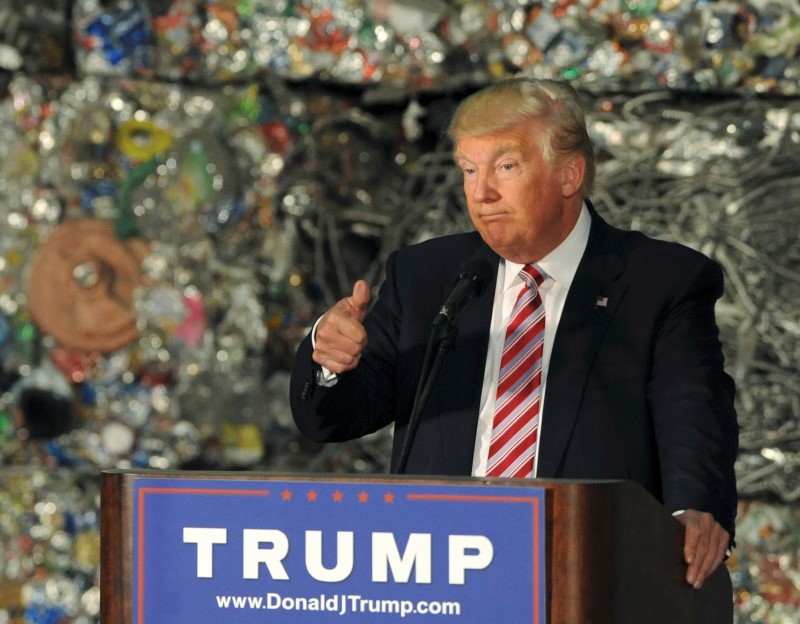 By Emily Stephenson and Amanda Becker

MONESSEN, Pennsylvania/WASHINGTON (Reuters) – Republican presidential candidate Donald Trump on Tuesday vowed to force Canada and Mexico to renegotiate the NAFTA trade agreement with the United States if elected, as part of an effort to protect and restore American jobs.

Trump criticized the North American Free Trade Agreement as a U.S. job killer, saying he would be willing to scrap the pact if Canada and Mexico were unwilling to budge. He also tried to link Democratic rival Hillary Clinton to the deal on the eve of a meeting in Ottawa of the “three amigos,” the leaders of the three NAFTA signatories: the United States, Mexico and Canada.

In his most detailed speech on trade, the presumptive Republican nominee said he would pull the United States out of negotiations for a deal among 12 Pacific Rim nations and promised to use executive power to resolve trade disputes with China.

Trump has identified Pennsylvania as a state he believes he can wrest from the Democrats in the Nov. 8 election. He also campaigned on Tuesday in Ohio, which like Pennsylvania is a Rust Belt state.

Democratic President Barack Obama won both states in 2008 and 2012, but manufacturing job losses have led to voter anxiety in the region.

“I’m going tell our NAFTA partners that I intend to immediately renegotiate the terms of that agreement to get a better deal for our workers. And I don’t mean just a little bit better, I mean a lot better,” Trump said in Pennsylvania.

If Canada and Mexico do not agree to renegotiate the pact, Trump said he would notify them under the agreement’s terms “that America intends to withdraw from the deal.”

He tried to tie his Democratic rival to the pact, approved in 1993 during the administration of her husband, President Bill Clinton, as he called NAFTA one of the “worst legacies” of the Clinton years.

On MSNBC after Trump’s speech, Clinton spokeswoman Kristina Schake called the wealthy New York businessman the “king of outsourcing,” in an apparent reference to Trump-branded products such as suits and ties made overseas.

“It was full of hypocrisy and misstatements and outright lies,” Schake said.

Trade has been a vulnerability for Clinton, who struggled for white, blue-collar votes in her Democratic primary race against U.S. Senator Bernie Sanders, who criticized her for supporting trade deals and said she was too close to Wall Street.

Trump echoed Sanders’ criticism on Tuesday, saying Clinton supported the 12-nation Trans-Pacific Partnership, or TPP, while she was secretary of state and only opposed it once she was running for president. Clinton’s campaign said she opposed the agreement because it was not strong enough on currency manipulation and other areas.

Clinton has said she will evaluate each trade deal on its merits but does not believe the TPP is good for U.S. workers. Sanders now says he will vote for Clinton in November, although he has not formally withdrawn from the race.

Trump said he saw no way to fix the TPP, calling it a “death blow” for American manufacturing. Although China is not part of the agreement, Trump said Beijing might try to enter it “through the back door” later on.

Later, during a rally in St. Clairsville, Ohio, Trump said the deal was “just a continuing rape of our country.”

Earlier, AFL-CIO President Richard Trumka told a trade conference in Washington that “Trump embodies everything that is wrong with our current trade policy. He has consistently sent American jobs overseas to line his own pockets.”

The AFL-CIO, which collectively represents more than 12 million workers, making it the largest U.S. labour federation, endorsed Clinton this month.

Both Clinton and Trump have acknowledged that Britain’s vote to leave the European Union signalled a global economic frustration among working-class voters that could reverberate in the U.S. election.

“There is a lot of legitimate anxiety, fear and even anger in many parts of our country because people feel like the economy has failed them,” Clinton said in Denver on Tuesday. “I think this is going to be one of the defining issues in this election.”

Trump has seized on the historic Brexit vote to bolster his argument that voters are rising up against establishment leaders, saying Americans would reject the “global elite” and support his presidential candidacy.

But Trump has broken with Republican Party orthodoxy in criticizing trade deals, and has threatened to slap tariffs on Mexican and Chinese imports. His rhetoric has drawn criticism from many economists, who say such practices could spark trade wars.

As Trump spoke, the U.S. Chamber of Commerce, which is usually in sync with prominent Republicans on trade policy, said on Twitter: “Under Trump’s trade plans, we would see higher prices, fewer jobs, and a weaker economy.”

Australian icebreaker runs aground in Antarctica