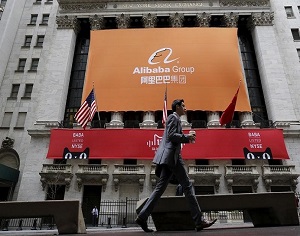 SHANGHAI (Reuters) – China’s Alibaba Group Holding Ltd on Thursday said it has signed a deal for a $3 billion five-year loan, which will help the e-commerce giant as it’snaps up stakes in companies within China and overseas.

Alibaba, led by founder Jack Ma, has been expanding in areas beyond its core e-commerce base, such as online video, as volume growth in its online shopping business slows.

The firm said in a filing to the U.S. Securities and Exchange Commission (SEC) that it had signed the syndicated loan deal with a group of eight lead arrangers. It added that the amount could increase if there was steep demand.

“The loan, which is subject to upsize through oversubscriptions in syndication, has a five-year bullet maturity and is priced at 110 basis points over LIBOR,” the company’said in the filing, referring to the benchmark interest rate used by many global banks when making loans.

Alibaba added that the loan would be used for “general corporate purposes”, without expanding on what this meant. A China-based Alibaba spokesman declined to comment further.

The U.S.-listed firm has been on something of a spending spree of late: its capital expenditure in the last three months of 2015 was 4.9 billion yuan ($752 million), more than triple the level in the same period in 2014.

The Wall Street Journal cited sources last month saying Alibaba was in talks with several banks to borrow up to $4 billion to fund expansion plans, including acquisitions.

(Reporting by Adam Jourdan; Additional reporting by John Ruwitch in SHANGHAI and Paul Carsten in BEIJING; Editing by Stephen Coates)