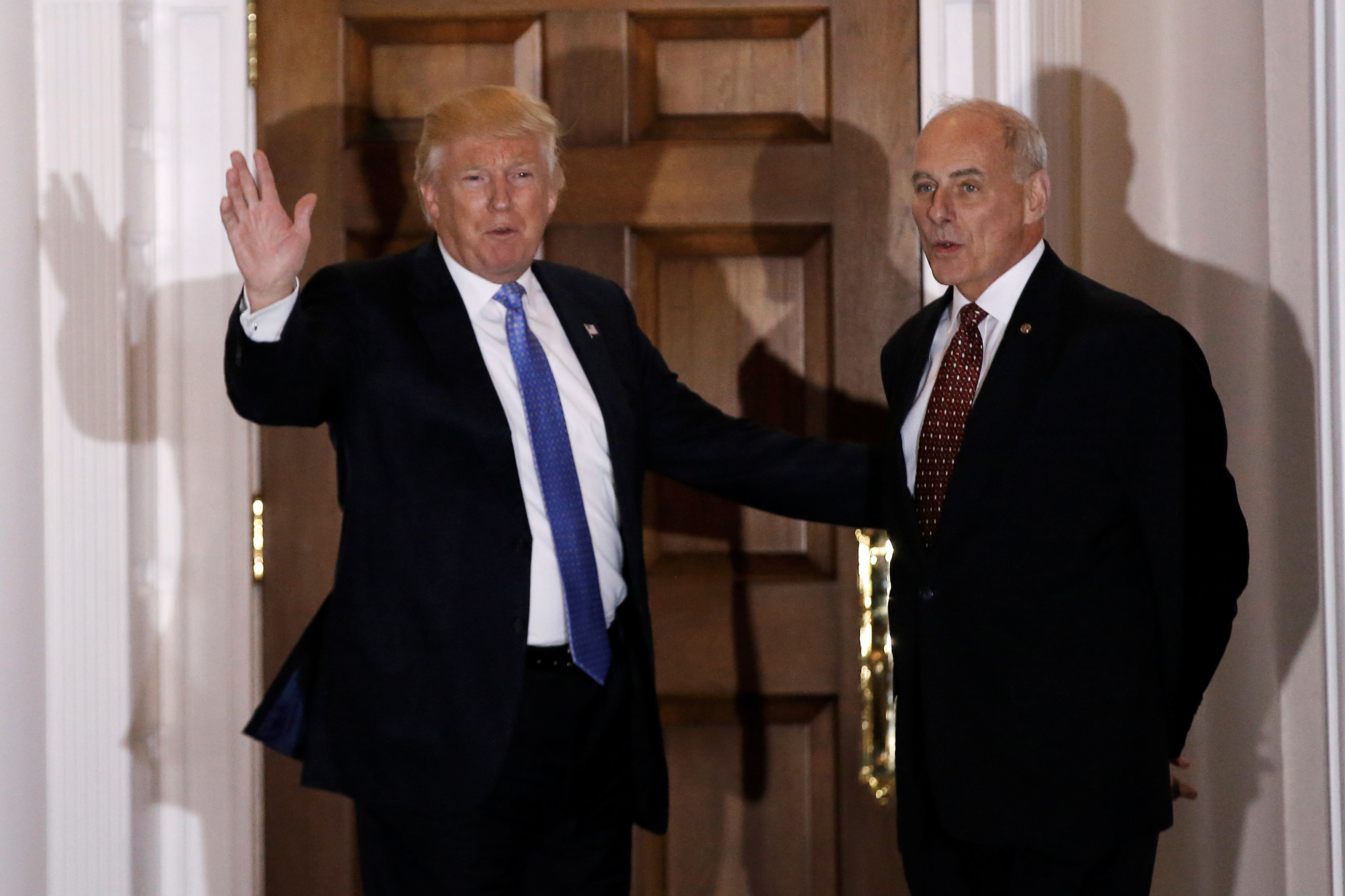 By Steve Holland and Warren Strobel

NEW YORK/WASHINGTON (Reuters) – President-elect Donald Trump plans to nominate a third retired general for a top job in his new administration with the choice of a battle-hardened Marine commander to lead the agency set up after the Sept. 11, 2001 attacks to protect the U.S. homeland.

Trump is expected to name former Marine General John Kelly, 66, as head of the Department of Homeland Security, a source familiar with the decision told Reuters on Wednesday.

Kelly told Fox News on Wednesday that he has “been asked and would consider it an honour.”

If confirmed by the Senate, Kelly will be in charge of the agency tasked with securing borders against illegal immigration, protecting the president, responding to natural disasters, coordinating intelligence and counterterrorism.

Like Trump, Kelly is believed to hold strong views on stopping illegal immigration. The four-star general told a congressional committee last year that the lack of security on the U.S.-Mexican border represents a national security threat.

As former head of the military’s Southern Command, Kelly was responsible for U.S. military activities and relationships in Latin America and the Caribbean. He was a proponent of keeping open the U.S. military prison in Guantanamo Bay, Cuba.

Kelly, whose son was killed fighting the Taliban in Afghanistan, retired in January after a 45-year military career. CBS first reported that Trump would nominate Kelly to the position, which would put him in charge of more than 240,000 employees. Those include Secret Service and Border Patrol agents as well as the agency that clears refugees for resettlement in the United States.

Under President Barack Obama, the department’s Border Patrol and immigration enforcement agents were criticized by civil rights groups for acting as a paramilitary force that neglected the humanitarian mission of helping immigrants escaping violence.

With a retired general as chief, the department risks furthering that image and facing backlash from Democrats and immigrant rights groups.

Trump energized voters in the election campaign by promising to build a wall on the U.S.-Mexico border in order to keep out Mexican immigrants he described as rapists and murderers.

In testimony last year before the Senate Armed Services Committee, Kelly said people-smuggling activities on the southern border were a dire threat.

“Terrorist organizations could seek to leverage those same smuggling routes to move operatives with intent to cause grave harm to our citizens or even bring weapons of mass destruction into the United States,” Kelly said.

Such sentiments may have endeared him to Trump, who warned repeatedly during his presidential campaign of dangers from illegal immigration, and pledged to build a wall along the border and make Mexico pay for it.

The Republican president-elect, who has no military experience, also plans to nominate retired General James Mattis to lead the Pentagon and picked retired Lieutenant General Michael Flynn to be his national security adviser.

Trump may be forced to look to generals to fill key positions because of his lacking relationship with Republican establishment figures, said former White House and State Department official P.J. Crowley.

“He never served in government, so until the campaign, he didn’t have an established bench,” said Crowley.

“He’s forming a pick-up team on the fly. On an individual basis, they have a lot of international operational experience but far less domestic political experience. How well they will gel together remains to be seen,” said Crowley, author of “Red Line,” a book on U.S. foreign policy.

Kelly served in Iraq several times, and in 2003 was the first Marine in more than 50 years to be promoted to the rank of brigadier general while in a combat zone.

Human rights groups had feared someone would be appointed to Homeland Security with a stronger anti-immigration position, such as Kansas Secretary of State Kris Kobach, who is a proponent of reinvigorating a system to track Muslims entering the United States on visas.

But Sharry said he was concerned over the number of generals Trump has appointed.

“At times Trump’s cabinet looks like a military junta. There’s been a securitization of migration that is out of whack with reality,” said Sharry. “But I’ll take a general with knowledge of the Americas over a radical like Kobach.”

Kelly questioned the Pentagon’s decision to allow women to serve in combat, and differed publicly with President Barack Obama over the Democrat’s attempt to close the Guantanamo Bay prison.

“There are no innocent men down there,” Kelly said of Guantanamo in a January interview with the Military Times newspaper.

The Republican-controlled Senate must confirm Kelly for the Homeland Security post.

‘No survivors’ after plane crash in northern Pakistan mountains

The Homeless Gets Hope