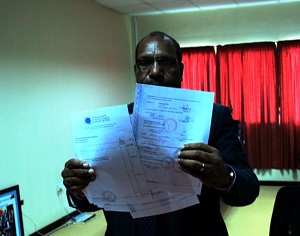 The awarding of a contract for phase two of the Integrated Government Information System (IGIS) has apparently bypassed proper tendering procedures.

Secretary for the Department of Communication and Information, Paulias Korni, says the Central Supply and Tenders Board (CSTB) failed miserably to consult the implementing government agency.

Secretary Korni says the second phase of the IGIS project will be halted if this is not addressed.

Secretary Paulias Korni alleged that the decision by CSTB on the 6th of February this year has not followed the proper legal, financial and tender processes. He says the contract signing between the state and Computing and Communication Institute of PNG (CCIPNG) is flawed.

Korni says IGIS is a nationwide roll-out project and is a security matter in protecting government information.

The IGIS project is a system that will connect government departments and agencies. The first phase has been completed, which includes scoping, while the second phase includes a security layer on networking and costs almost K9 million.

Communications Minister Jimmy Miringtoro is still tangled with this decision since being briefed via text message on CSTB’s decision. The Ombudsman Commission has acknowledged Secretary Korni’s request for an investigation.