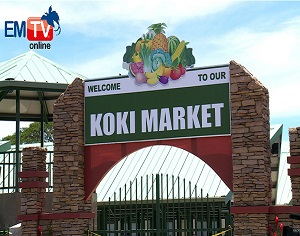 Markets in the National Capital District are being refurbished, with major improvements to facilities.

The Koki market in Moresby South is one such market that has undergone reconstruction to all its facilities, including a new police post.

Over the years, the market has lost its traditional value.

At the official opening today, vendors were challenged to take ownership of the market and use the facility to earn an income.

Koki is the second market in Moresby South to see a total reconstruction of its facilities, which are now able to last for over 30 years.

The market was constructed at the cost of K7 million, of which K5 million came from the National Government and K2 million from the local MP and the NCD Governor’s District and Provincial Improvement Program Funds.

It has over 30 market stalls and is part of the government’s push to give a face lift to government facilities in the country.

With the opening of the market, the NCD Governor Powes Parkop has placed much emphasis restoring the Papuan tradition of trading amongst Papuan villagers and the rest of Papua New Guinea.

“Koki is an historical market and we need to bring back that tradition of trading between the Motuan villagers,” Parkop said.

But there is also good news for vendors at Gordon’s, Tokarara and Hohola: these markets will be seeing refurbishment in the coming months.

Koki Market is one of the oldest traditional trading areas for Papuan villagers.

It was once a gathering spot for all Motuan villagers, and in the past played host to the famous Hiri trade.