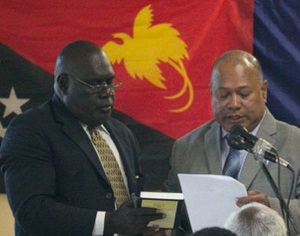 There is no room for corruption within the Bougainville public service sector, says newly-appointed Chief Secretary to the Autonomous Bougainville Government, Monovi Amani.

Mr Monovi warned that those involved in such flawed activities will be dealt with accordingly under their ‘Zero tolerance On Corruption’ policy.

The Zero tolerance On Corruption policy is among other disciplinary measures to be implemented within Bougainville’s public service sector to promote good governance.

Public servants must keep from such practices that only serve to deprive the people from much needed goods and services. Work ethics through attendance and a smart dress code will be implemented, with public servants expected to clock in at 7:45am and clock out at 4:06pm, Bougainville standard time.

Public servants clocking in later than 8:30am will be recorded as not having turned up for work.

Monovi said the public service sector will not encourage overtime but rather promote healthy living. Chewing of betel nut is also banned.

There will also be strict governance on vehicles to ensure no unnecessary abuse of assets. Accountability will be high on the agenda and this means that cost of service delivery must be established first to know resource levels are required.

Monovi said a performance agreement will be signed with the ABG president that will entail policies this government would like to achieve annually.

All heads of departments will be held accountable for the achievement of their sectorial objectives in any given year. Failure will result in a performance review for contract renewal.