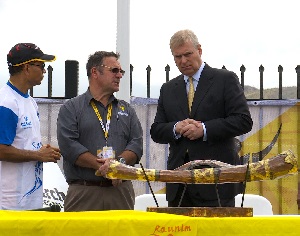 Its day three of His Royal Highness, the Duke of York’s visit to Papua New Guinea.

This morning Prince Andrew visited the Coronation Park in Down Town, Port Moresby, and the Games Village at the Waigani and the Adventure Park at 14 Mile.

His Royal Highness, the Duke of York’s visit to the Games Visit was not only a spectacular moment but also a uniting one for all pacific athletes.

He was escorted around the village with the company of Sport Minister, Justin Tkatcheko, where he allowed time for few handshakes and gave athletes an opportunity to take pictures of him.

After receiving the 2015 Pacific Games Baton, the Duke of York gave an official’speech on how sports play a uniting role for people all over the world and in this occasion, the Pacific Games in Port Moresby.

Prince Andrew then concluded the 100 Days Journey of the Pacific Games Baton relay across Papua New Guinea and officially Commissioned the Games Village.

The Duke of York then travelled up to Adventure Park at 14 Mile where he met, shook hands and chatted with the recipient of the Young Queen’s Leaders Award Winner, John Taka for the second time.

It was a proud moment for Taka as he recalled the Prince was present when he received his award from Buckingham Palace in England.

The Prince spent at least 30 minutes at the Park where he spoke to youths.

He also delivered a speech on the importance of having life qualities and being an agent of change in the communities we live in.

The Duke of York will officiate the opening of the Pacific Games this evening.

Businessman Claims To Have Title Over Angau’s Allotment