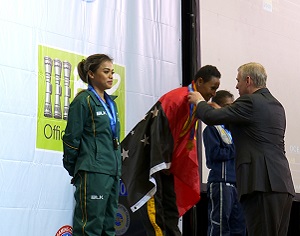 PNG Weightlifting has once again shown its dominance, smashing Two Oceania records on its way to collecting the country’s first lot of Gold medals at the 2015 Pacific Games.

And it was a familiar name that again left the Pacific in awe, collecting Three Gold medals.

PNG Power dome was a sea of Red Black and Gold, walking into watch the weightlifters in action, and it didn’t take long for the PNG crowd to start their celebrations.

Toua lifted an impressive 70kg in the snatch category and an amazing 90kg in the Clean and Jerk category, for an overall lift of 160kilograms.

In the process smashing two oceania records with her 90kg lift in the Clean and Jerk surpassing the previous record of 87kg set in 2007.

To cap off an unforgettable day for the young Hanuabada lass, she was presented her Gold medal by the Duke of York, Prince Andrew.