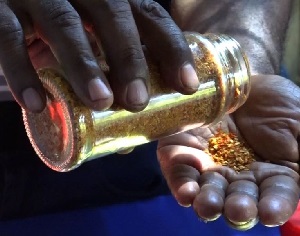 Papua New Guinea’s potential to develop a large scale spice industry was again highlighted at the start of the Morobe show today.

Spice producers have been working for years with little government incentive. But the potential for PNG to rake in large export revenues has not been fully exploited.

Ramu Suger Spices is a small company that operates in Lae.

No large offices, no fancy infrastructure, just a handful of people who work with growers to produce spices for the local market

“The only businesses we’re selling to is Prima and Pelgens,” says Ramu Sugar Spice’s Anna Peter.

Several years ago, Company Founder Paul Kundia found out about the medicinal properties of cinnamon – a commonly found skin diwai. He began producing Cinnamon powder for sale both as a herbal medicine and as a spice.

“We are encouraging farmers to grow spice and sell it to us,” says Kundia.

Many of the spices that are currently imported can be grown in papua New Guinea.

For instance, Turmeric powder: an important ingredient in food colouring and Asian food dishes. It is a plant found almost everywhere in Papua New Guinea. As a spice producer, Paul Kundia says there needs to be more government support to develop this industry.

Goroka Spice Producer, Noda Obusere, affirms “the benefits must go back to the people in the villages.”

The spice industry is still in its infancy, but if government efforts were focused on this sector, it could bring an enormous amount of revenue and that is for one simple reason: Spices are easy to carry over long distances and it pays more.

“People are growing spices throughout the country at the moment. But it’s not systematically coordinated in order to enhance this crop.”

Wingti with a record budget for Western Highlands