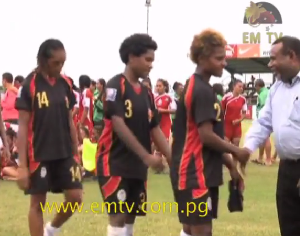 They made their international debut outside of Oceania as a build up for the Pacific Games and Olympic qualifiers. The side kicked off their return to the international stage, with a two match series against Singapore, where they opened with a scoreless draw, before earning a 5-0 victory in their second match against Thailand.

Next up are three matches against Thailand, ranked 31st in the world to Papua New Guinea’s 48th, a ranking achieved after making a massive 85 place leap up the table in the most recent women’s ranking release.

Papua New Guinea has been inactive since the OFC Women’s Nations Cup in October, and returning coach Gary Phillips, says the fact the side is on track is obvious from the differing results between match one and match two. Between finishing runners-up to New Zealand in Kokopo and heading off on their tour of South-East Asia, Phillips has made nine changes to the squad – a decision he says relates to the bigger picture.

With two more matches against Thailand remaining, Phillips is realistic about his side’s chances, with the focus being on the Pacific Games, and assessing new talent.

He also believes the team is not yet at the Nations Cup level.

The expectations for the team are clear; gain an improved knowledge of how we play, and to reconfirm clear objectives leading up to the Pacific Games and potentially, an Olympic Games play-off.”

After playing their first match against Thailand on Sunday, Papua New Guinea have two games remaining against their opponents on 11 and 14 March, before they return to home soil where they will continue building for the 2015 Pacific Games.

Vaki: Immediate Investigation Into Hit And Run Incident In Pom